In any other year, there would be some measure of caution or trepidation, but the three forces of a “Phase One” deal with China, a Fed Chairman declaring that the Fed isn’t inclined to raise rates anytime soon, and an October employment report that debunked any notion of a pending recession is more than making up for the earnings shortfall. Let’s just say that on a relative basis, the sky is blue. On an absolute basis, one wonders how the market can levitate so strongly with the S&P trading at a P/E of 17.4. 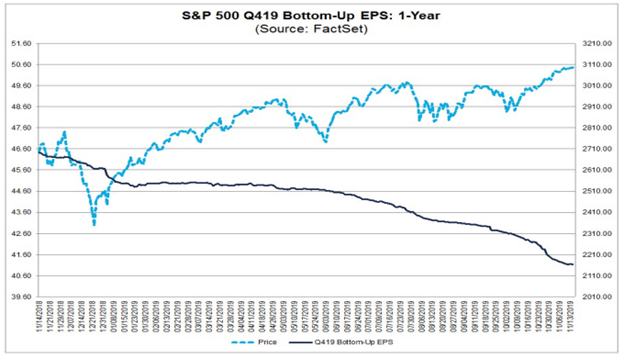 Well, it’s not hard to figure. Big expectations for an earnings surge in 2020 are being priced in as we speak, fueling the F.O.M.O. (Fear of Missing Out) trade by cash-rich investors. Even though Wall Street is concentrating on the S&P growing earnings by 9.7% next year, that number has been recently lowered from 10.6%. Still, it’s a major reversal to the upside and investors have seized on this assumption. I might add that it is my personal view that the market is also pricing in another four years for President Trump.

There’s an old saying that “you can never be too skinny or too rich.” And it will take big bucks to beat The Donald.  The latest display of card-carrying Democrat billionaires jumping into the 2020 election race for the White House is a full display of a “panic mode” in the making. First, Michael Bloomberg and Tom Steyer took the place of early entrant, billionaire Howard Schultz. Then came former Massachusetts Governor Deval Patrick, a former managing director at Bain Capital, where Mitt Romney was once CEO.

At the New York Times DealBook conference, Bill Gates criticized Elizabeth Warren’s proposal to levy a wealth tax on billionaires. As Gates put it, “I’ve paid over $10 billion in taxes. I’ve paid more than anyone in taxes. If I had to have paid $20 billion, it’s fine,” Gates added. “But when you say I should pay $100 billion, then I’m starting to do a little math about what I have left over.” 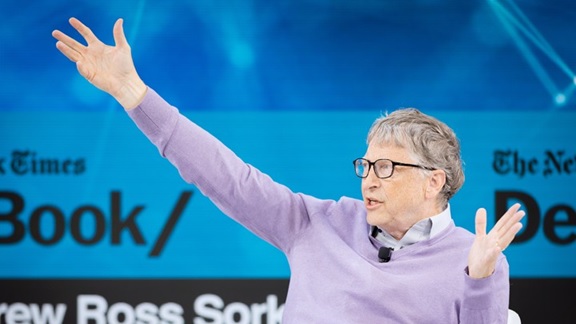 This is what scares the hell out of many successful people. Once the socialist redistribution wealth genie is out of the bottle, it’s curtains for every society that has gone down this road – since civilization began.

Who is going to argue with Bill Gates, Warren Buffett and the rest of the billionaires and multi-millionaires that have signed the Giving Pledge to commit at least half of their wealth to charitable causes? What Elizabeth Warren fails to understand,  is that some of these people, if threatened, may simply leave and become citizens of more tax-friendly countries.

Every day, I read on MarketBeat about the amazing amount of stock sales from corporate insiders that feed the U.S. Treasury with hundreds of billions of dollars in capital gains taxes.  If the rich change tax jurisdictions, their lives won’t change. They will still own all their property, but they’ll pay no income tax here, or in their new home in Monaco. Why? Because unlike most people, they can.

It’s my personal view that before New Year’s Eve, Hillary Clinton will enter the race, but only if Joe Biden’s numbers collapse.

So, while the stock market enters a new higher trading range, the election cycle is sure to bring some new measure of uncertainty and a whole lot of entertainment. “You can’t always get what you want” in politics, and I do hope President Trump and his trade team don’t lower their guard against China.

What’s going on now will greatly affect the global economic and political chessboard for the next generation and beyond. At some point the drunken sailor spending increases by all levels of government in both Parties has to stop, starting with the President, but that’s another rant for another day. As the political rhetoric reaches historic levels of visceral attack where “some material may not be suitable for children – Parents Strongly Cautioned,” I suspect that when the dust settles from the impeachment hearings and the votes come in next November, the Trump economy will still be humming right along.