11.19.19: Profits and Productivity are on the Rise, Driving Markets Up

You wouldn’t know it by some of the headlines and talking heads – some of which I’ll quote below – but business fundamentals keep getting relentlessly better, driving stock prices up. The current bull market is a record-setter, nearing 11 full years next March, up about 25% this year and +367% since March 2009.

In past columns, I’ve covered a number of fundamentals, but let’s just look at the long-term trend in two key “P” words – Profits and Productivity. First, the bottom-line profits of U.S. corporations were given a sudden boost in 2017 with the Trump tax bill, which cut the top marginal corporate tax rate from 34% to 21%. Corporate profits peaked at a record high 10.9% in the fourth quarter of 2017, just before President Trump and his then-House Speaker Paul Ryan cut top corporate tax rates. Within three quarters, the net corporate profit margin shot up to a new record high of 12.5% in Q3-2018. (The latest reading is 11.7%.) 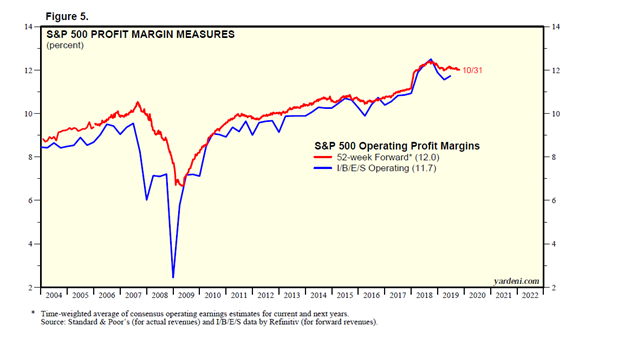 The red line in the chart (above) is the 52-week forward profit margin for the S&P 500 calculated by Yardeni Research. It has been hovering around 12% all year through October 31, according to Yardeni. As Yardeni notes, “that’s impressive given that the headline news suggests that tariff and labor costs have been rising all year. If so, then rebounding productivity growth must be offsetting those cost increases.”

The latest productivity data showed a slight decrease, but if you look at the longer-term (year-over-year) trend, you see a productivity rise of 1.4% last quarter, since non-farm business output rose 2.3% while hours worked increased 0.9%. (Productivity roughly equals growth in output per hour.) 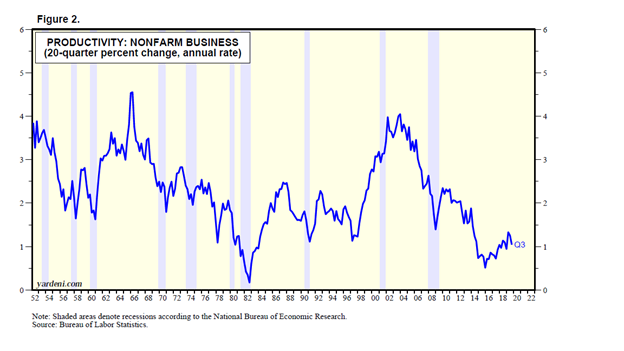 Yardeni and others see a long-term trend of productivity increases beginning now, due to the cloud and 5G. So many offices are now decentralized. Like Yardeni, we at Navellier produce MarketMail from all over the nation. Our five authors perform independent analysis and write from Florida, Virginia, New Jersey, Nevada and Washington, and the letter is sent by email from our corporate headquarters in Nevada. This greatly reduces the need for large in-house IT and HR departments, among other overhead costs.

In a 2017 paper, “The Coming Productivity Boom,” Michael Mandel and Bret Swanson explained:

“The 10-year productivity drought is almost over. The next waves of the information revolution—where we connect the physical world and infuse it with intelligence—are beginning to emerge. Increased use of mobile technologies, cloud services, AI, big data, inexpensive and ubiquitous sensors, computer vision, virtual reality, robotics, 3D additive manufacturing, and a new generation of 5G wireless are on the verge of transforming the traditional physical industries—healthcare, transportation, energy, education, manufacturing, agriculture, retail, and urban travel services.”

So, if workers are productive and companies are profitable, why does the press say we’re so miserable?

I subscribe to way too many magazines for my own good. I’m a sucker for good writing, and some of the best writers love to indulge in the purple prose of the Apocalypse. Over the weekend, I read some suicide notes for the American Dream in several great magazines, led by the December Atlantic’s “How to Stop a Civil War” and its lead essay, “A Nation Coming Apart,” by its editor Jeffrey Goldberg – which began:

“The structural failure in our democratic system that allowed a grifter into the White House in the first place – this might be our gravest challenge. Or perhaps it is the tribalization of our politics, brought about by pathological levels of inequality, technological and demographic upheaval, and the tenacious persistence of racism. Or maybe it is that we as a people no longer seem to know who we are…” 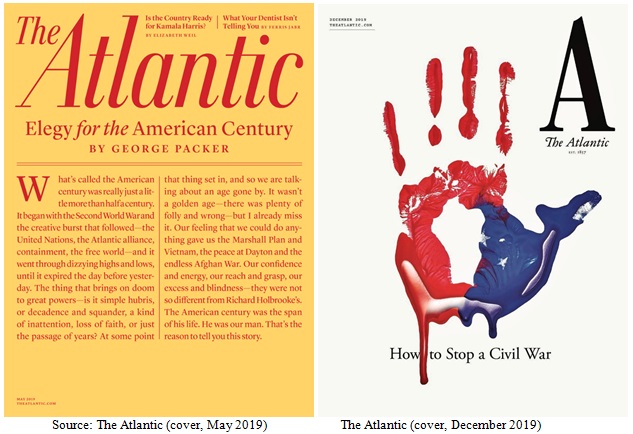 But how about the Atlantic editor’s reference to a “pathological” wealth divide? That comes from looking at income alone, ignoring income after taxes AND after government benefits, which narrow the gap.

Specifically, the published census data for 2017 portrays the top quintile (20%) of households as having almost 17 times as much income as the bottom quintile. But this picture is false. The top 20% pay almost two-thirds of all income taxes and the bottom 20% pay few taxes. The Census Bureau also fails to count $1.9 trillion in annual public transfer payments to lower-income American households. The Bureau ignores transfer payments from some 95 federal programs such as Medicare, Medicaid and food stamps, which make up more than 40% of federal spending, along with dozens of state and local programs.

The last time the “wealth gap” was acceptable to the social levelers was in the 1970s. Anyone want to go back to that decade of high inflation, sinking stock prices, no Internet, gas lines and Nixon/Ford/Carter?