While the Federal Reserve maintains that its recent repurchase agreement activity – as well as the buying of Treasury bills of up to $60 billion – is not Quantitative Easing (QE), if the Fed balance sheet is growing and so are excess reserves in the banking system, it becomes the very definition of QE.

The operation – let’s call it QE4 – is supposed to carry through the second quarter of 2020, as per the Fed’s own statements. We don’t know when in the second quarter such QE maneuvers might end, but whether it’s April or June, we’re liable to see a record-high Fed balance sheet during that quarter.

The lowest reported point of the Fed’s balance sheet since the balance sheet normalization started was $3,759,946 billion ($3.76 trillion rounded) on August 28, 2018. The latest reported level is $4,047,882.  That’s close to +$300 billion in QE added in just 2-½ months since the disruptions in overnight interest rate markets started in September. If the Federal Reserve carries the $60 billion monthly rate until the second quarter, that would mean that it would have surpassed the $4.5 trillion all-time high of its balance sheet holdings (set in February 2015) sometime during June of 2020. 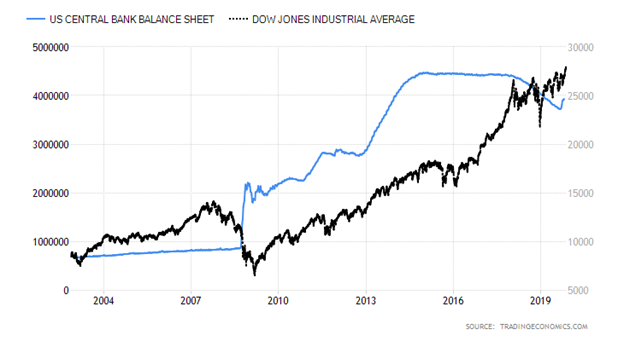 I don’t believe that the Fed’s balance sheet is the only determinant of the level of the stock market, but it sure is a major factor. Balance sheet expansion is like printing money – but for financial institutions only. It does affect the monetary base (excess reserves plus currency in circulation), which is the narrowest definition of money supply (M0). It basically causes asset price inflation without causing uncontrolled broad money supply growth, which is why has it has not (yet) resulted in hyperinflation.

In prior economic downturns, the Fed would lower interest rates, which would stimulate lending, which would help lift the economy out of a recession. After the 2008 downturn, the Fed not only lowered interest rates but provided a large amount of electronic dollars, called excess reserves, which first affected the prices of Treasury and mortgage securities, investment-grade corporate bonds and ultimately junk bonds and stocks. One could argue that the Fed pulled the economy out of a deflationary hole in large part using asset prices, so it was not the improving economy affecting the prices of financial assets, but financial assets causing the economy to improve.  I think we have the similar QE dynamic at present.

While philosophically I do not find palatable such extreme levels of intervention in financial markets, since it has not backfired yet, one should assume the Fed would keep doing it, until/if/when it backfires.

What to Buy in the Present Environment?

The most obvious beneficiary of QE4 is gold bullion, particularly if it weakens the dollar. Gold and the dollar have been more or less rising in tandem over the past year, as it is hard for the dollar to decline when both the ECB and BOJ are involved in QE. Also, interest rate differentials still are very much in favor of the dollar. The recent $100 pullback from its 2019 high is probably a buying opportunity in gold.

Another beneficiary of QE would be risk assets, which would include members of the Nasdaq 100 Index, or the specific FAANG stocks, some of which have been appreciating in anticipation of a trade deal with China. The trade deal is important to the present rally in the stock market, as an escalation of trade tensions means higher tariffs and less global trade, which is putting the brakes on the global economy. 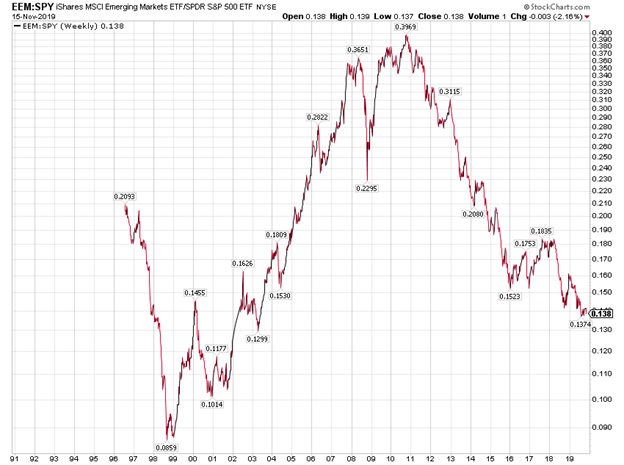 I think the Chinese have dragged out the trade negotiations intentionally late in the Presidential election cycle, as President Trump needs a victory to talk about in his election rallies. Now they will give him a half-baked deal known as “Phase I,” at which point both the chief Sun Tzu disciple from Beijing, as well as well as The Donald will be able to claim victory.  Laggards like Wells Fargo (WFC) should catch a bid in the present environment, as well as high-beta financials like Goldman Sachs (GS).

A trade deal is likely to reverse, at least in the intermediate term, the nearly 10-year underperformance of emerging markets relative to the S&P 500. That means many of those Chinese stocks which are rising due to short covering or the reversal of no-trade-deal trades probably have more room to run with a trade deal. Obvious beneficiaries of a relief rally are Alibaba (BABA), JD.com (JD), Tencent Holdings (TCEHY) and Baidu (BIDU). Investors interested in a more blanket approach should consider the iShares China LargeCap ETF (FXI) and the more inclusive iShares Emerging Markets ETF (EEM). 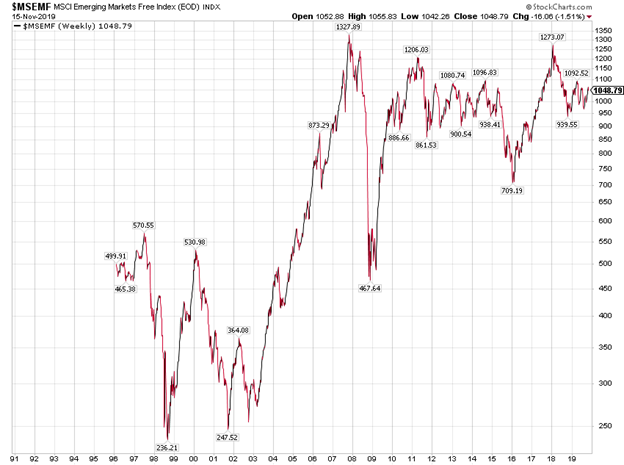 With a trade deal and accommodative Fed, a good target for the S&P 500 is the 3,400-3500 range. In a similar scenario, it is conceivable that the MSCI Emerging Markets Index, which registered a closing all-time high of 1328 in 2007, will try and retest that level in 2020.

Without a trade deal, however, all bets are off.