It has been a brutal 10 years for emerging markets, if one looks at the MSCI Emerging Market Index (below), which is the benchmark for investors interested in the space. Any way you slice it, being a U.S-based investor since 2009 would have paid off rather well, but this trend may get a meaningful reprieve. 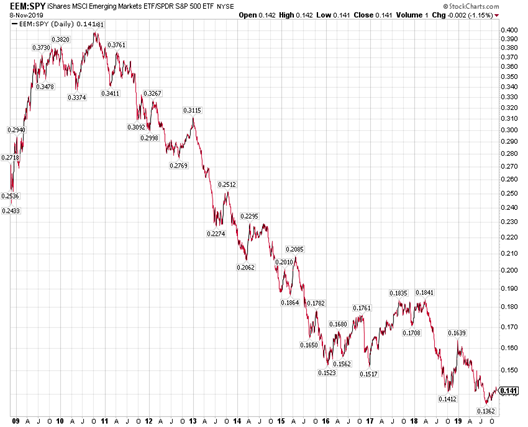 I think the 10-year emerging markets relative disaster (to the S&P 500) is about to go on hold for the next 6-12 months – if Phase I of the infamous U.S.-Chinese trade gets signed in late November or early December, as we are getting indications from both sides. This would remove the Damocles sword hanging over global trade and allow most emerging markets to have a meaningful relief rally. 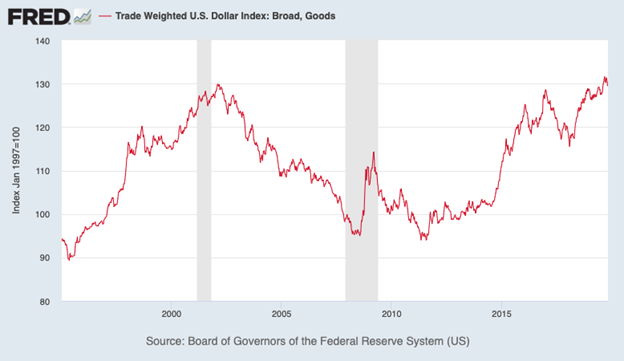 One of the main reasons to be bearish on the emerging market space in 2018 went away in 2019, namely, the Federal Reserve’s quantitative tightening cycle ended. Emerging markets in the aggregate had gone on a dollar borrowing spree in the past 10 years, and a Fed tightening cycle caused rising dollar interest rates, causing the Broad Trade-Weighted Dollar Index to reach an all-time high above 130, which also pushed the JP Morgan Emerging  Markets Currency Index to go to an all-time low. (For more details, see Marketwatch, May 30, 2018, “The carnage in emerging markets stocks is just beginning”).

While the worst-case scenario certainly did not work out, both Turkey and Argentina, which were singled out as potential trouble spots back in May 2018, suffered massive currency devaluations. The “big one” in that scenario (China) also saw forex outflows and somewhat of a stealth-devaluation of the yuan, but nothing on the scale of Turkey and Argentina. One can say that the ability of the Chinese authorities to assert their control (yet again) over capital outflows and manage the exchange rate of the yuan prevented the 2018 emerging markets crisis from spiraling out of control, as I had originally feared.

The reason to be bullish on the emerging markets for the intermediate term is that the very drivers that pressured the space in 2018, namely trade and Fed tightening, have reversed or are in the process of reversing. Not only did the Fed cut its Fed funds rate three times, but its balance sheet started growing again due to disarray in short-term funding markets in September, with surging overnight interest rates.

A growing Fed balance sheet is an injection of liquidity – like printing electronic dollars, but for financial institutions only. It tends to rub off positively on risk asset prices, as seen by a strong junk bond market and a U.S. stock market at an all-time high. I certainly do not expect the Fed balance sheet to grow like it had in prior QE stages, but under the present “QE-lite” stage, it certainly gave the necessary boost to risk assets, of which emerging markets stocks are a major component.

The Reversal of “No-Trade-Deal” Trades and What to Avoid

Some of the Chinese ADRs that have been under pressure of late are likely to catch a break upon the deal announcement, and they have already moved in anticipation of the trade deal. While the trade deal is certainly not the only  driver of those equities, it sure was a major dark cloud, the removal of which will allow for a more normal price discovery process, where their rapidly growing business prospects, primarily centered in the Internet services space, will be more accurately reflected in their share prices.

Key candidates for the relief rally are Alibaba (BABA), JD.com (JD), Tencent Holdings (TCEHY) and Baidu (BIDU). Investors interested in a more blanket approach should kick the tires on the iShares China LargeCap ETF (FXI), which would also help diversify away some individual company risks.

While the beneficiaries of a trade deal are pretty obvious in this case, there are also emerging markets to be avoided. If any dead-cat bounce comes to Argentina and/or Turkey, they should be avoided, or sold.

The Argentine peso crashed upon the primary election results in the summer and revisited those lows after the Fernandez/De Kirchner victory in late October. Most Argentine dollar-denominated bonds trade at 40 cents on the dollar at present. Argentina has not defaulted, even though their bond prices indicate that the chance of default is high. Given the inclination of Peronist governments in Argentina to inflate away their debts and keep interest rates below the rate of inflation, I don’t think this saga is over. Somewhere in this mess, there will be assets on the cheap that can be picked up, but Argentina has turned out to be a terrible destination for long-term investors over the years. 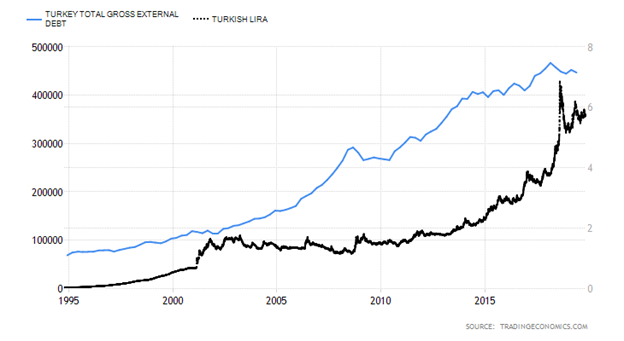 Turkey has a horrendous dollar-denominated debt overhang. While the Turkish situation is certainly more manageable than Argentina, it is by no means stable and the Turkish lira may very well have another leg lower. This situation is for short-term traders only, and by no means for the faint of heart.