11.12.19: Tearing Down the Berlin Wall 30 Years Ago Supercharged Trade…and Stocks

The Dow Jones Industrials closed Thursday night November 9, 1989, at 2,603.69, although the concrete was already crumbling on the Berlin Wall. By dawn Friday, the 28-mile-long (and 28-year long) Berlin Wall, the most chilling emblem of the Cold War, was suddenly a pile of rubble.  All night long, East and West Germans celebrated their new freedom, as they walked freely across that once-deadly dividing line.

East and West Germany soon united.  By Christmas, each Eastern European Soviet satellite collapsed, like … well, like dominoes. How did this “domino theory” work so well, in reverse?  First, Gorbachev’s glasnost (openness) and perestroika (restructuring) led to the resignation of Erich Honecker, East Germany’s brutal Communist ruler. Then, the East Germans opened their borders to West Germany.

As we look back from this vantage point of 30 years later, we can see the markets rose 9-to-18-fold:

These market gains reflect the sudden growth in the volume of trade in the U.S. and Germany post-1989: 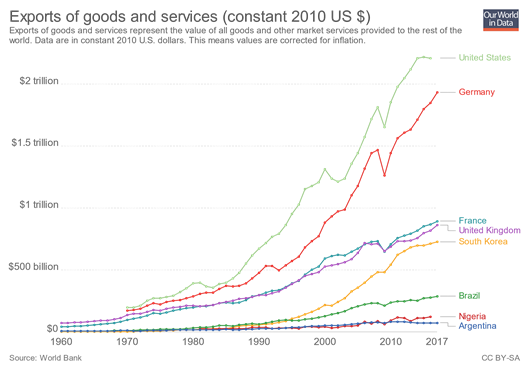 It’s a lesser-known fact that China also committed to a more open-trading economy after Tiananmen Square. In the early 1990s, Deng Xiao-Ping reaffirmed his economic reforms in a southern tour of China in 1992, reopening the Shanghai stock market and launching a new economic zone in Pudong, across the river from Shanghai, a former farmland, now among the most prosperous new trading centers in China.

Hundreds of millions in China and other nations have emerged from absolute poverty into middle-class lifestyles through access to global trade. According to The World Bank, 1.9 billion people lived in extreme poverty in 1990 (36% of the world’s population), but the percent living in absolute poverty decreased to 630 million (8.3% of global population) in 2018. (Source; https://ourworldindata.org/extreme-poverty )

As the next chart shows, the most dramatic increase in wealth and decline in poverty has taken place since the fall of the Berlin Wall in 1989, creating wider access to global trade: 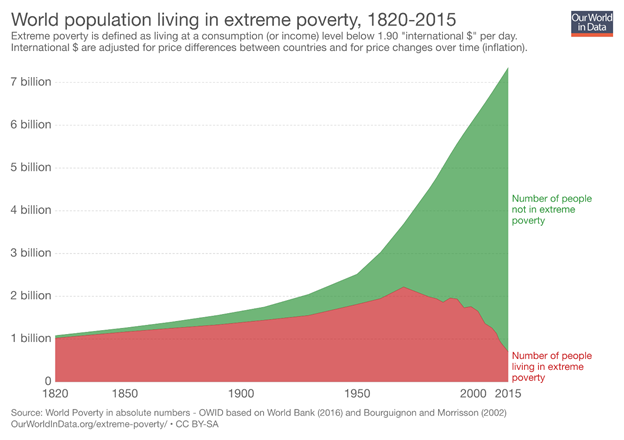 A Veterans Day Lesson – Freedom Can Be Fragile

At the time the Berlin Wall fell, many pundits in America were still touting the coming crash. At major investment conferences I attended, the bears always dominated. Ravi Batra had a best-selling book, “The Coming Depression of 1990 – Why It’s Got to Happen, How to Protect Yourself.” Instead, we were about to launch the best decade in stocks ever. (The only “Depression” in the 1990s came in Japanese stocks.)

At last week’s New Orleans Investment Conference, I’m happy to report that one lifelong perma-bear – who had predicted a “Greater Depression” to come, at every conference since 1979, told me in the final panel that “maybe I should reconsider my 40-year stance as a perma-bear,” so there is indeed some hope!

Back in late 1989, however, some pessimism was understandable. Five months earlier, demonstrations in Tiananmen Square in China led to a brutal repression of demonstrators and a crackdown on freedom, so why should the Berlin Wall fall without repercussions from the Soviet Union, as in 1956 in Hungary?

Going back further to Armistice Day, 1918, on the 11th hour of the 11th day of the 11th month, the “Great War” ended, but the Armistice was a hollow victory since the world never recovered from World War I, as it led to a global Depression followed by a second World War and then a long Cold War after that.

Going back even further, the French Revolution of 1789 solved nothing. It soon devolved into a Reign of Terror, then Napoleon’s costly wars, and then the Bourbon Restoration, as if nothing had ever changed.

After the fall of the Berlin Wall, we went through some false hopes, reflected in a book called “The End of History” (1992) by Francis Fukayama. The book proposed that the end of the Cold War and dissolution of the Soviet Union meant that the world would soon be entirely liberal democracies, but that didn’t turn out to be true, as demonstrated so dramatically on September 11, 2011 in an attack by radical Islamists.

As we prepare for the coming 2020 election year, let us not forget to celebrate the 400th anniversary of the Mayflower Compact, which set the tone for America’s freedoms. On November 11, 1620, the Mayflower set anchor in what is now Provincetown, at the tip of Cape Cod, Massachusetts. At anchor, the Mayflower Compact was drafted and signed by the 41 male Pilgrims on board(mostly Puritan Separatists, who had traveled to America to escape the jurisdiction of the Church of England).  The Mayflower Compact was later hailed as the origin of the democratic institutions that evolved into the Declaration of Independence.

Yesterday, we celebrated our veterans on November 11. The battle for freedom is never over. As Ronald Reagan said, “Freedom is never more than one generation away from extinction. We didn’t pass it to our children in the bloodstream. It must be fought for, protected, and handed on for them to do the same.”

Markets were open on Veterans Day, but all investors must thank our veterans for the peace they deliver.