What a crazy year for investing year 2019 is turning about to be. It was only one month ago, in the first week of October, that the negative ISM data crossed the tape, knee-capping the S&P 500 130 points (-4.3%) over a three-day period. That was a brutal gut-check for the long-running bull market. Had the global slowdown in Europe and the trade war with China finally broken the Teflon skin of the U.S. economy?

The 47.8 reading for September was the lowest in a decade and was seen at the time as a canary in the coal mine. Industrial production makes up 11% of GDP and Boeing (BA) production and shipments of the 737-MAX went offline, and the GM strike slowed shipments of autos as well. The fluid trade and tariff landscape – not only with China, but with the EU as well – was seen as hitting U.S. industrial exports, resulting in lower factory output and less inventory building from a more guarded outlook by businesses..

Here’s a rundown of the Top 10 U.S. Exports (by annual dollar volume)

The market’s early October trade fears subsided with headlines of a “phase one” deal with China, followed by a possible amicable Brexit plan with the EU and the assumption that the Fed would have the market’s back and cut rates for a third time this year. These factors outweighed the prior recession fears and the S&P 500 and NASDAQ closed October at new all-time highs. And the breakout above 3,000 on the S&P looks technically legit, given the fresh rotation into cyclical sectors.

The key takeaway from the jobs report is that it does not reflect an economy on the brink of a recession. On the contrary, it is emblematic of an economy that is expanding and looks poised to sustain the longest economic expansion on record thanks to a solid labor market and rising wages to fuel consumer spending.

Friday’s release of the ISM Manufacturing Index for October remained below the expansion/contraction line (50) for a third straight month, but the increase to 48.3% was viewed as better-than-feared. That helped to generate an almost 180-degree reversal of Thursday’s sell-off tied to negative commentary about China’s skepticism regarding the prospects of a long-term trade agreement with the U.S.

One new catalyst that totally defies the slowing global growth narrative is Friday’s sudden high-volume breakout in the deep cyclical sectors. Stocks of steel, materials, mining, chemicals, railroads, heavy equipment and machinery companies charged higher – led by a 17.3% spike in U.S. Steel (X). Could these stocks residing in the market’s penalty box be putting in more than a one-day head-fake rally?

That’s hard to say, given the negative factory data both here and abroad, but deep cyclicals could move quickly higher before many of the “quants” pick up on them or turn even slightly favorable. The power of a change in perception that becomes reality almost overnight is an amazing force when fund managers see capital flows suddenly shift into stocks of companies leveraged to expanding economic growth.

With so many cautious fund managers under-invested and positioned in recession-resistant sectors and looking where not to chase stocks with big gains, it could just be a time where perception of U.S. and global economies picking up speed in the fourth quarter and into 2020 is spreading. This view got some support when the Fed noted that they moved to a neutral stance at last week’s FOMC meeting, which was followed by an uptick in bond yields.

Navellier & Associates does not own GM, X or BA in managed accounts and our sub-advised mutual fund.  Bryan Perry does not own BA, X, or GM in personal accounts.

The chart of the Industrial Select Sector SPDR ETF (XLI) shows that a test of the January 2018 high is underway: If shares of XLI clear $81, then this ETF and the industrial sector are set to trade higher. How much higher is hard to say, but the old saying of “the longer the base, the bigger the rally” will certainly be a major talking point this month if this sector does indeed break out from current levels. The really good news for income investors is that several XLI components pay juicy dividend yields north of 3.0%. 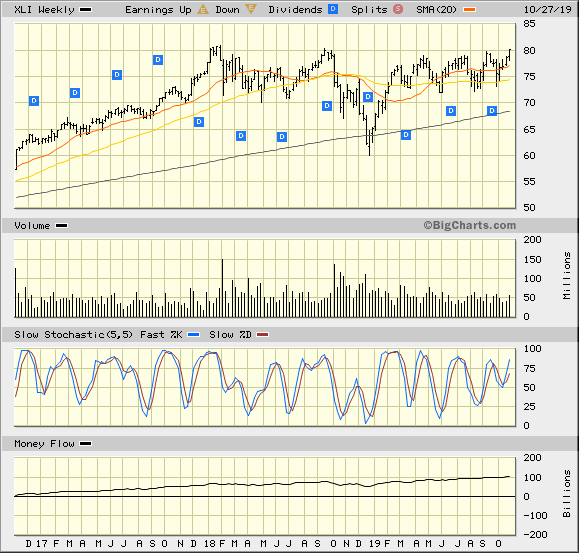 One day doesn’t make a trend, but the move we saw late last week is impressive and should not be ignored. I’ve noted in recent weeks that the rally in the banks, construction and semiconductors enjoyed first-mover status and are still trading in a bullish manner, but the early and easy money has been made. If the U.S. and global economies are indeed on the verge of reversing course and picking up, then the profit opportunity for the deep cyclicals is more reality than perception.