The Federal Reserve cut interest rates again last Wednesday, as expected, and that effectively “un-inverted” the yield curve. Just as quickly as that, the big bugaboo of the bears was erased, since this was not a “genuine” yield curve inversion based on market rates shrinking due to a weak economy. The recent trend in lower long-term Treasury rates had more to do with Europe and Japan slicing their rates down below zero than anything going on in the U.S. economy, so the Fed’s rate cut cured any inversion-phobia.

The Fed rate cut and the resulting “un-inversion” is one reason the stock market rallied. The 10-year Treasury bond yield also rose a bit, further “un-inverting” the yield curve, as the Federal Open Market Committee (FOMC) voted decisively (8-to-2) to cut key interest rates another 0.25%. In making this move, the FOMC statement did not add any significant policy changes, but noted that household spending remained strong, while business investment and exports remained weak. Most Fed experts believe that the “data dependent” Fed is on hold and may not cut rates much further. I agree with this consensus, so if the Fed makes any further interest rate cuts, it may be due to lower Treasury yields and softer economic data.

Last Tuesday, the Conference Board announced that its consumer confidence index declined to 125.9 in October, down from a revised 126.3 in September. This was significantly lower than the economists’ consensus estimate of 128. Interestingly, the “present situation” component rose to 172.6 in October, up from 170.6 in September, which bodes well for continued strong consumer spending.

On Wednesday, the Commerce Department reported that its first (preliminary) third quarter GDP growth estimate decelerated slightly to a 1.9% annual pace, down from a 2% annual rate in the second quarter. It is now clear that the Fed is continuing to cut key interest rates to try to maintain positive GDP growth (as long as inflation remains soft). Overall, however, we remain in a “nirvana” environment – with steady economic growth, low interest rates and an accommodative Fed, which clearly wants to avoid a recession. 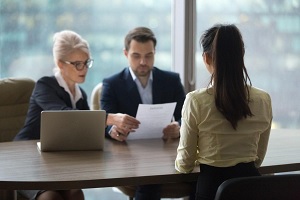 The unemployment rate rose slightly to 3.6% in October, up from 3.5% in September – and that was likely due to the 40-day GM strike, so I expect that the unemployment rate will decline in November. Average hourly wages rose 0.2%, or 6 cents, to $28.18 per hour in October. Wages have now risen at a healthy 3% annual pace over the past 12 months. The labor force participation rate is now at 63.3%, its highest level in over six years (since August 2013). However, the most important improvement is that prime age workers, between ages 25 and 54, hit a 10-year high participation rate of 82.8%!  Overall, this was an incredibly positive payroll report that bodes well for continued strong economic growth.

Navellier & Associates does not own GM or BA in managed accounts and our sub-advised mutual fund.  Louis Navellier and his family own BA but not GM in personal accounts.