Recent events involving the launching of an impeachment inquiry put a fresh wrinkle in the political optics of the China trade negotiations set to take place this Thursday and Friday in Washington DC. Leading up to this pivotal round of talks, there was widespread consensus that the U.S. was in a better position to command how a deal might be consummated to the satisfaction of the U.S. team’s position.

As events would have it, the rhetoric from both Senate Intelligence Committee Chairman Adam Schiff and President Trump has reached a visceral level, sucking all the oxygen out of the room from any political momentum about inking a deal with China that would accomplish something no President has been able to manage since China joined the World Trade Organization (WTO) – to have China actually adhere to accountable measures that run counter to its current illegal and secretive practices. How this gets done, what measures of accountability are put in place, is largely unknown but is integral to any deal.

In a surprise development that opened up a new front on the trade war, reports of efforts to restrict China in its access to U.S. capital markets and possibly delist Chinese stocks caught the market fully off guard, triggering a wild sell-off. Though the White House denied the reports, there is gathering momentum on Capitol Hill that such capital controls on China would be a potentially powerful tool of leverage.

Time to Reset How China Does Business in the U.S.

Under the Obama administration, China signed a memorandum with the U.S. in 2013 that exempts Chinese companies from submitting to U.S. audits and Dodd-Frank regulations. This is outrageous. The current notion of capital controls being considered by Trump & Co. reflects a bipartisan legislative effort spearheaded by Senator Marco Rubio (R., Fla.).

In June, Rubio, along with senators Tom Cotton (R., Ark.), Bob Menendez (D., N.J.), and Kirsten Gillibrand (D., N.Y.), cosponsored the EQUITABLE Act, which would “delist foreign companies that do not comply with U.S. accounting and oversight regulations from American exchanges.” That bill would, if implemented, give Chinese firms three years to either alter their financial reporting practices or be cut off from the world’s largest capital market. To say this legislation is way overdue is an understatement.

So, the upcoming trade talks that have been framed out for the past month by both sides now have some new catalysts at work. On the one hand, it would seem President Trump is now more than ever motivated to strike a deal with China so as to maintain political momentum against a backdrop of rising skepticism surrounding the Ukraine affair, while China is facing a new and deeper threat to its economic future – being cut off from lucrative U.S. markets, as part of a larger goal of a “financial decoupling” with China.

With an impending tariff increase from 25% to 30% on $250 billion of Chinese goods planned for October 15 and further tariffs slated for December, the prospect of capital controls and access to U.S. financial markets adds a new dimension of uncertainty to the U.S.–China trade war — and sharply divided responses to this idea illustrate a rift between populist policymakers on the Trump team – like Lighthizer, Mnuchin, and Navarro – vs. the Wall Street/U.S. multinational business community that have sold out the American middle class to China for access and profits.

Equity markets rallied late last week on the “bad news for the economy is good news for further Fed easing” line of thinking. The odds of the Fed lowering the Fed Funds Rate from 1.75% to 1.50% at the upcoming October 30 FOMC meeting spiked from 39.4% a week ago to 76.4% last Friday. The weak PMI and ISM data triggered a trap door sell-off that took almost 1,000 points off the Dow over a two-day period, exposing just how sensitive the market is to negative news that signals cracks in the U.S. economy. 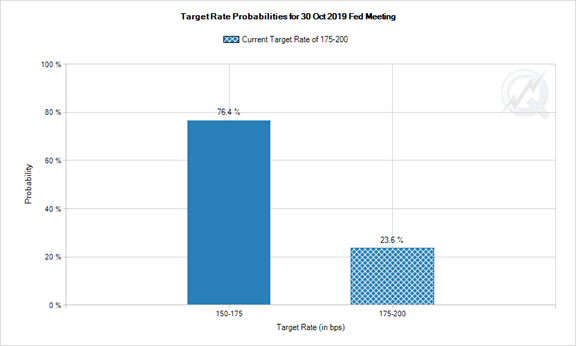 I believe that because of the impeachment inquiry, the threat of more pending tariffs, the legislative momentum of new capital and listing standards on China, and the Fed conducting new overnight Repo operations in what is being viewed as liquidity stress within the banking system – the pressure to do a deal on U.S. and China trade has been ratcheted higher. 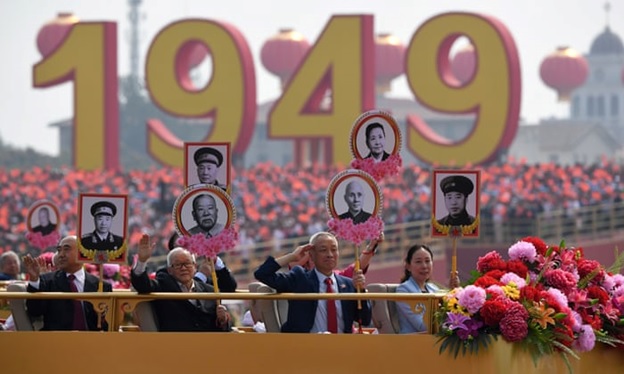 In fact, much higher – and I haven’t even addressed how the whole protest movement in Hong Kong could impact the trade talks if that situation results in Chinese troops invading Hong Kong in a crackdown that would have a devastating effect on that country’s economy and the surrounding territories.

Last week, China’s President Xi proclaimed at the 70th anniversary of Communist party rule that “no force can shake the status of this great nation” – just as all hell is breaking loose in Hong Kong. So, while there may be a trade deal of sorts this week, to avoid further punitive actions and market volatility, there will be a lot of attention on China and how it conducts itself on the world stage, both here and at home.