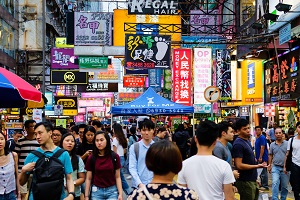 For decades, Hong Kong has demonstrated what capitalism can achieve in the shadow of Communism. However, ever since China took control of Hong Kong from Britain on July 1, 1997, Beijing has increasingly been striving to integrate Hong Kong into China. This integration has become a massive failure due to Hong Kong’s clear desire to remain a sovereign state, as demonstrated by fierce clashes last week in Hong Kong as China’s Communist Party celebrated its 70th year in power, without local cooperation. Live bullets were reportedly fired by riot police and at least one 18-year old student was hit. The security crackdown in Hong Kong is very embarrassing to China’s Communist Party and President Xi Jinping.

Hong Kong was essentially on a lockdown last week after clashes in dozens of locations caused riot police to order citizens to stay at home. Obviously, it is an embarrassment to China to see how many in Hong Kong do not want to be controlled by mainland China.

The unelected leaders in Beijing also try to manage the mainland economy for rapid economic growth but in a top-down manner, including artificial support of many State-Owned Enterprises (SOEs), which cloud the overall picture there. I feel that private corporate statistics are more reliable than government statistics there, so last week I was encouraged to see that the Caixin China manufacturing purchasing managers index (PMI) rose to 51.4 in September, up from 50.4 in August. This private PMI survey was a pleasant surprise. I also noted that total new orders grew at a faster pace, due largely to rising domestic demand.

Mixed U.S. Economic Statistics Send the Market Down (then Back Up)

Like China, the economic statistics in the U.S. were “mixed” last week. For instance, the stock market tanked last Tuesday on the downbeat announcement from the Institute of Supply Management (ISM) that its manufacturing index slipped to 47.8 in September, down from 49.1 in August, reaching the lowest level in 11 years (since the Great Recession!)  This was a big surprise, since economists were expecting the ISM manufacturing index to rise to 50.2 in September. Production, employment, and inventories all declined in September, which the stock market took to reflect the advance warning signs of a recession.

The only bright spot in the ISM report was that the new orders component rose a bit in September to 47.3, but it is still below 50 and near its weakest level in more than a decade. Interestingly, only three of the 18 industries surveyed in September reported an expansion, down from nine of 18 industries in August. Overall, this was a very weak ISM manufacturing report and should coax the Fed to seriously consider cutting key interest rates at its next Federal Open Market Committee (FOMC) meeting in late October.

In a companion report released Thursday, ISM reported that its non-manufacturing (service) index also declined in September, but from a much higher level (56.4 in August) to 52.6 in September. This was also substantially below economists’ consensus estimate of 55.3. Although the service sector is still growing (over 50), this is the lowest reading in three years, although 13 of 17 sectors were expanding.

Finally, the Commerce Department announced that trade continues to rise – shockingly, in defiance of all the “trade war” rhetoric. Exports rose 0.2% in August, driven by a 3.4% increase in capital goods, led by fuel oil exports. Vehicle exports rose 2.7%, their highest level since July 2014. Imports rose 0.5% in August, led by a 3.4% increase in consumer goods, reaching $57.23 billion, which is a record. Cell phone imports surged 13.3% in August and will likely remain strong, due to the popularity of Apple’s new iPhones. Overall, the financial media’s claim that global trade is slowing down is clearly unfounded!