On October 16, September retail sales figures came in at -0.3% and the market went down slightly before recovering. The media headlines were unnecessarily downbeat over this one-month anomaly:

You wouldn’t know from this chart that retail sales are up about 21.5% in the last five years. Unlike most statistics, the retail sales number is a month-over-month change, which is virtually meaningless. It is not accompanied by an “annual rate” or a 12-month change, which would be far more meaningful. This chart (above) merely tabulates the 60 different month-over-month changes over the last five years. They range from a meaningless 2% monthly decline last December to a meaningless 2% monthly gain in 2017. Most recent changes are on the order of +0.5%, which sounds small but works out to a juicy 6% annual rate. 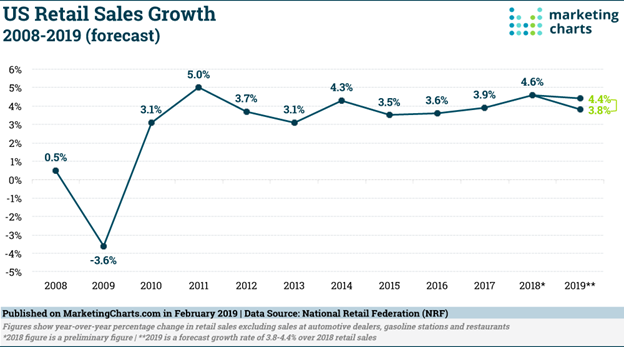 By the way, those 2019 forecasts (above) are way too low. For the first nine months of 2019, sales are up by a cumulative +5.2%, which is a 7% annual rate, the best in five years. The three-month annualized rate has consistently remained above 5% for the last three months, as shown by this Yardeni Research chart: 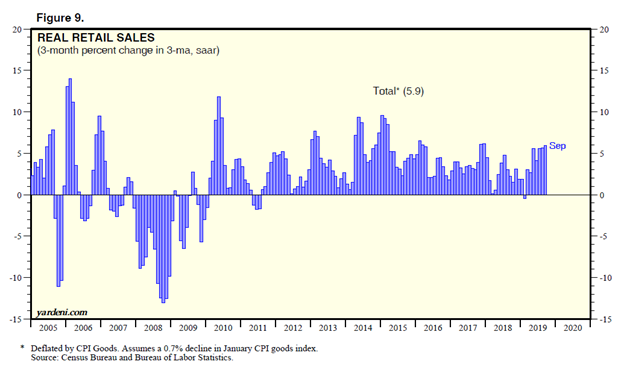 So why all this scary talk about “shaky consumers” and a “consumer economy that could be cracking”?

“When Americans are happy, we go shopping. When Americans are depressed by the news, we do even more shopping, because it releases dopamine in our brains. And online shopping gives us an even stronger dopamine fix than going to the mall, reported Psychology Today, citing a Razorfish report, Digital Dopamine. High percentages of shoppers from the US, UK, Brazil, and China in 2014 reported getting more excited to receive online purchases than to buy things in a store.”

As these two charts show, global retail sales are growing about 4.5% per year and the percentage of those sales from e-commerce is growing at double digits, by over 20% per year in recent years. 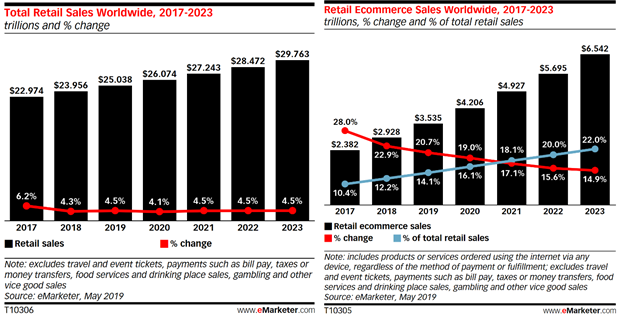 You can buy almost ANYTHING online, at the touch of a mouse click. How enticing, how alluring, how addictive! Christmas is just around the corner, and America is rich. Don’t sell the U.S. consumer short.

The Consumer Has Plenty of Shopping Ammunition (Cash)

Two days after the September retail sales report came out, CNBC interviewed Nobel Prize-winning economist Robert Shiller on Friday, October 18. He said that any recession may be years away due to a combination of bullish effects on the economy due to Trump’s policies (see “Robert Shiller: Recession likely years away due to bullish Trump effect”). Shiller is an expert in a field called “behavioral finance” and he feels that consumer spending is motivated by a “president who models luxurious living.” Really?

Specifically, Shiller predicted the next recession may be three years away and would be mild. He also said that if the economy remains strong in 2020, he expects Trump to be re-elected. Regardless of whether his theories pan out, there are many reasons why consumers should keep consuming strongly: 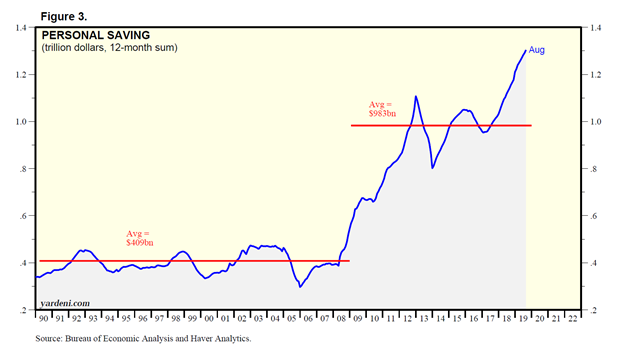 We likely won’t see a market crash or a recession until we see a blow-out red-hot economy and a market mania first, and we haven’t seen either. It’s not like 90 years ago today, “Black Tuesday” 1929, the first-ever back-to-back double-digit percentage daily losses in history, but in 1929 the Dow had doubled from August 1927 to August 1929. It was due for a crash. If I may summarize, the most important cause of the crash in October 1929 (or October 1987) was that stocks had doubled in the previous two years. Period.