Because we had an inverted Treasury yield curve recently, everyone is looking for the S&P 500 to top out and head straight down due to a coming recession, which is what inverted yield curves are supposed to foretell. There are some parallels with late 2007, when the U.S. yield curve inverted, and the S&P 500 followed with a fresh all-time high in October of that year. But is a recession really coming soon?

First, as I have written here, I do not believe this is a “kosher” inversion. I believe that Treasury yields are being pulled lower by what is going on in Europe and Japan, where the ECB and BOJ are overdosing the system with QE and negative interest rates, based on the same monetary medicine that the Fed used to “fix” the U.S. economy. Without getting into the deeper philosophical discussion of whether the U.S. economy is really fixed, as it never de-leveraged, it has to be acknowledged that in the past 10 years the U.S. has seen much better economic performance than either Europe or Japan, while those two central banks have been more aggressive, given the size of the respective economies they are trying to stimulate.

The ECB balance sheet is pushing 4.7 trillion euros ($5.2 trillion), while its policy rate is marginally negative; the BOJ has a 569.8 trillion-yen balance sheet (which can also be converted to $5.2 trillion). For comparison, the Fed’s balance sheet is just under $4 trillion (but has been rising of late due to turmoil in the short-term interest rate markets, causing some to proclaim that the Fed has restarted QE). Still, the Japanese economy is much smaller than the U.S. economy, so the fact that the BOJ’s balance sheet is considerably larger speaks to the lengths the BOJ has gone to stimulate the Japanese economy. 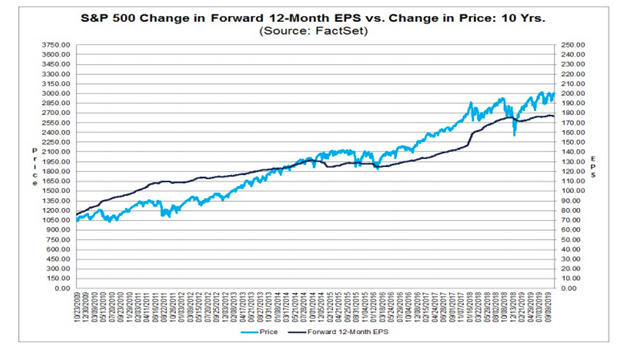 It is those newly minted electronic euros and yen that come from the rising BOJ and ECB balance sheets that are dragging U.S. Treasury yields lower, and not the performance of the U.S. economy. 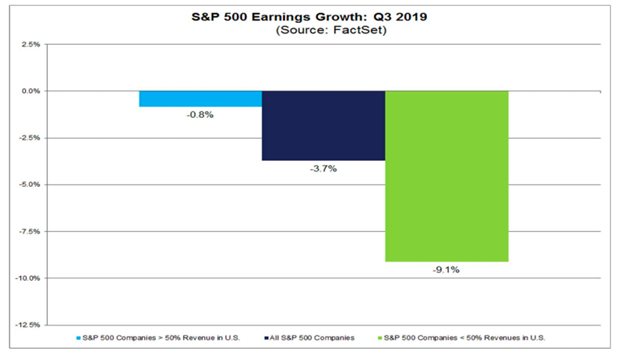 However, companies with over 50% of their revenues outside the U.S. are reporting much weaker earnings (-9.1%) vs. companies with over half of their sales in the U.S. (-0.8%). This is not surprising given the much weaker economic data in Europe and China. I continue to believe that the U.S. economy has a legitimate chance of re-accelerating in 2020, given that the much lower interest rates than would otherwise be if it were not for the policies of the BOJ and the ECB stimulating U.S. consumption.

Also, there is a tendency for major tax cuts to have a “second leg” effect on economic activity after the initial surge and a normal pause. We saw the first surge in 2018, a deceleration in 2019, but we have not yet seen the re-acceleration part of the tax cut, which is probably contingent on a trade deal with China.

The lack of a real trade deal with China has affected business confidence, thereby hurting capital investment, which is affecting the economy at the moment.

Is the Coming Impeachment Circus an Economic Event?

The short answer is no.

The only other impeachment in the last 45 years is that of Bill Clinton in 1998-99, when the economy and stock market completely ignored the political circus in Washington and rose sharply. It does not appear that there are the necessary votes in the U.S. Senate to vote Mr. Trump out of office, given the evidence on the Ukraine scandal that has been revealed so far. If nothing new materially emerges by the time the Senate has to vote, it does not appear likely that the current U.S. President will be forced to leave office.

If he does leave office, the Vice President is highly unlikely to make any major changes to economic policy that would rock the stock market and the economy. While the impeachment process does stimulate higher viewership on TV nightly talk shows, it is unlikely to have an economic effect.

The trade deal with China is more important than the impeachment process, which will probably marginally embolden the Chinese, since it could weaken Mr. Trump’s political position and help the Chinese get the better deal that the Chinese think they can get. Also, the closer the Chinese drag the negotiations to the election cycle, the more Mr. Trump needs to have a trade deal victory to talk about.