October could close on a positive stock market note if the Brexit compromise reached between the UK and the EU passes the necessary votes in the British parliament and gets the necessary final approvals in Brussels. It would definitely help if the first agreement with China on trade becomes more than just a headline, as the Chinese have made it clear that their agreement is conditional and they are willing to drag negotiations into the election year. The more President Trump is in political trouble in Washington, and the closer trade negotiations get to the election year, the better deal they’ll get – or so the Chinese think. 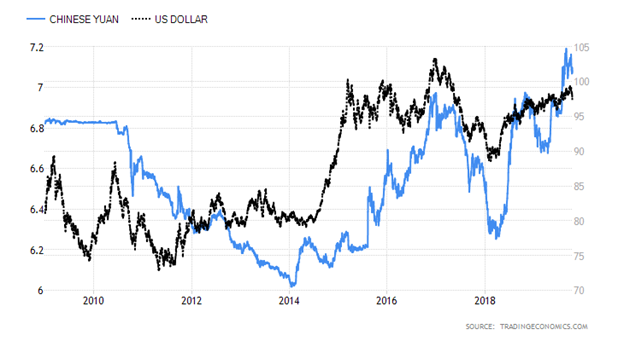 The euro and the British pound have bounced around due to the news on Brexit progress, and so has the Chinese yuan, putting marginal pressure on the U.S. dollar. I think the dollar can fall further if both Brexit and the Chinese trade negotiations deliver more positive headlines and we have concrete outcomes on both fronts. Still, I view the move in the dollar as a countertrend “risk-off” move that will probably find support near 95 or so on the old U.S. Dollar Index, but I think the dollar will make fresh highs in 2019, when it comes to the U.S. Dollar Index and the euro will likely flirt with parity (1:1).

It is not well-known that the U.S. dollar is already at an all-time high in terms of the less widely followed, but more relevant Broad Trade-Weighted U.S. Dollar Index, which is available on the Federal Reserve Bank of St. Louis website. That index includes a weighted average of the foreign exchange value of the U.S. dollar against the currencies of a broad group of major U.S. trading partners, which would include the Euro Area, Canada, Japan, Mexico, China, United Kingdom, Taiwan, Korea, Singapore, Hong Kong, Malaysia, Brazil, Switzerland, Thailand, the Philippines, Australia, Indonesia, India, Israel, Saudi Arabia, Russia, Sweden, Argentina, Venezuela, Chile, and Colombia.

The simplest way to explain the broad dollar index is that it is “trade weighted,” meaning the more we trade with a country, the bigger that currency’s weight would be in the index, so that China and other emerging markets with large trade volumes with the U.S. are an important component of that index. For comparison, there are no emerging market currencies in the old U.S. Dollar Index (DXY), which has frankly become outdated over the past 20 years, given how much the global trade landscape has changed.

The recent decline in the dollar has more to do with hope for a Chinese trade deal and an orderly Brexit than any change of the underlying fundamentals of the European economy being weak and getting weaker – with China’s economy following suit. Germany, where exports are vital, saw its manufacturing PMI plunge last month, indicating that the growth engine of Europe is likely headed into a recession.

What is most fascinating is that part of the support of the “UK LEAVE” vote came from the fact that Germany was too powerful within the EU and was using its power to strengthen its economy further via its export machine. Well, guess what? Without the UK in the EU, Germany will be even stronger economically and have less political opposition, so the balance of power has tipped toward the Germans.

Under the Worst-Case Scenario, the Dollar Still Rallies

Under a worst-case scenario, where the Chinese trade deal falls apart and does not materialize and Brexit gets delayed or cancelled, the dollar is still likely to surge. This simply means that the relief rally in the euro and the British pound will get cancelled while the pressure will be on the People’s Bank of China (PBOC) to devalue the yuan, since without a trade deal the tariffs will likely go higher.

Still, if I were to make a judgement call as to whether we are past the point of no return when it comes to a coming recession in the U.S., I do not believe we are there yet. Interest rates in the U.S. declined because of a bad economy in Europe and Japan, not here. Lower rates will boost the U.S. economy despite the trade uncertainty that is affecting the manufacturing sector.

It’s hard to get a recession started real soon with the unemployment rate at a historic low of 3.5%.