The Trump impeachment process is progressing at a snail’s pace – and may never happen – but the bears are spinning tales of market crashes along the lines of the horrible 1973-74 bear market, when President Nixon resigned to avoid impeachment over his Watergate cover-up. Alas, there are only three (possibly four) historical examples, so the sample size does not lend itself to solid answers, but the quick answer is that the current impeachment threat is NOT likely to impact our portfolios much over the next year.

#1: Let’s begin with the first impeachment trial of President Andrew Johnson, when the House passed articles of impeachment on February 24, 1868. The Senate trial ran from March 30 to May 6, with two May votes narrowly acquitting the President: 35 Senators voted to convict and 19 voted to acquit. With a two-thirds majority necessary for conviction, President Johnson was saved by a single vote.

#2: Over a century later, President Richard Nixon faced likely conviction in August 1974 when he resigned office. The market was in the midst of a two-year bear market related to a number of outside forces, including runaway inflation after the OPEC oil embargo, the ignominious end to the Vietnam War, the Federal Reserve raising interest rates several times, and the start of a recession in November, 1973.

The market bottomed out shortly after President Gerald Ford pardoned Nixon. Ford, a more mainstream Congressional Republican of a more even temperament, calmed the nation. Then came a phenomenal market recovery as the S&P 500 gained 65.6% from October 1, 1974 to October 1, 1976.

#3: Articles of impeachment were filed against President Bill Clinton on October 8, 1998, but that turned out to be the precise market bottom for the year, a perfect buying opportunity. That market bottom, however, wasn’t related to the impeachment process, which even then seemed overblown. It was due to the Long-Term Capital Management hedge fund crisis at the tail end of the Asian Currency Crisis. 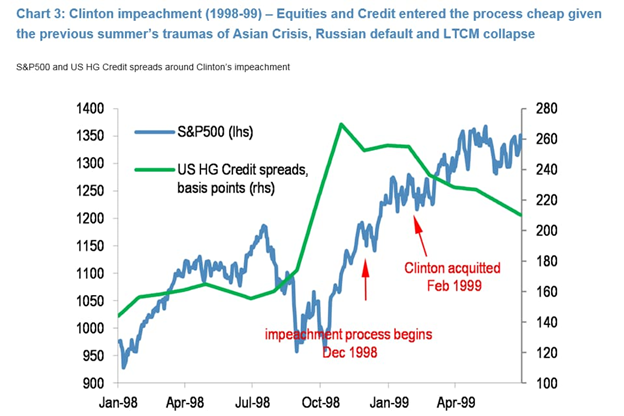 After the Clinton impeachment inquiry began on October 8, 1998, the S&P 500 rose 19% in a month and 42% in six months. From this example, investors might want Speaker Pelosi to “bring impeachment on”!

#4: The fourth possible parallel with the current impeachment process came back in 1987. On March 6, 1987, Rep. Henry B. Gonzales (D-Texas) introduced articles of impeachment against President Ronald Reagan regarding the Iran Contra affair. It’s not well remembered today, but there were hearings running three months – from May 5 to August 6, 1987 – including testimony by Oliver North and many others. The House never voted in favor of impeachment and the 1987 crash came for unrelated reasons, but the current situation may resemble that 1987 circus – lots of Congressional hearings but no real impeachment.

How Global Growth and a Cleaner Planet Can Co-Exist

Last Tuesday, a new book was published, “More for Less,” by Andrew McAfee. The Wall Street Journal reviewed it the next day and I bought it online. I’m not done reading it, but it shows the way to solve one major dilemma – a seeming conflict between advocates of a clean planet vs. more prosperity and growth.

We don’t face the dismal choice of either saving the planet OR killing the global growth engine, because technology “dematerializes” growth and miniaturizes most things. There’s no need for so many coalmines or steel plants in the 21st century. Americans are consuming less steel, aluminum, copper, fertilizer, water, timber, and paper than in previous decades, even as our yields per acre and GNP soar. Instead of carrying a camera, calculator, clock, pocket organizer, mini-computer, and phone, one small iPhone does it all.

Andrew McAfee, a research scientist at the MIT Sloan School of Management and co-author of “The Second Machine Age” (2014), credits the magic of the market – that people like carrying less weight so things get smaller. Technology also cuts down the need to travel. You can get a fine college education (or work a job) directly on-line. Also, I bought this book online, so it’s not a manufactured paper book. 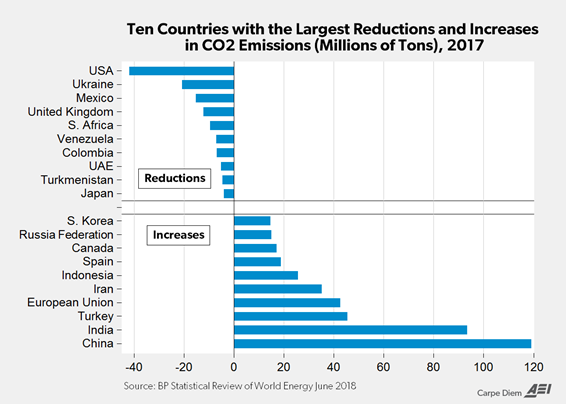 China and India must also breathe air in the most polluted cities on earth as they struggle through early stages of modernization to reach the relatively lower pollution levels of Europe or North America. As they get richer, pollution will retreat. Poverty is the problem. Technology and capitalism are the solution.