The marginal inversion of the Treasury yield curve has made a lot of news, given its ability to predict recessions on several prior occasions. If history repeats, we have already started some sort of a countdown to when the present economic expansion will end. However, if there is a China trade deal – and despite some positive signs of late, we don’t know if one will materialize – then a lot of the uncertainty in the global economy could be removed and a recession in the immediate future would be less likely. 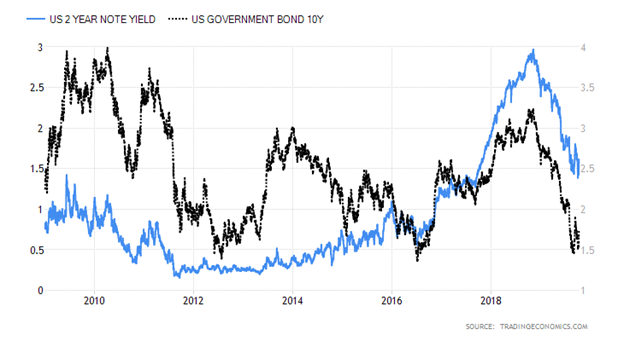 To be fair, I do not believe the recent minor yield curve inversions – the difference between the 2-year Treasury note and 10-year Treasury note yields – is completely Kosher. We have never had an inverted yield curve when trillions of dollars of government bonds in Europe and Japan have traded with negative yields. One can say that our yield curve has inverted due to these extreme monetary policies in Europe and Japan. That extreme monetary policy is a result of the local economies in those negatively yielding government bond markets not performing up to par, so it’s their subpar economic performance and their central banks that help our yield curve invert, and certainly not the performance of the U.S. economy. 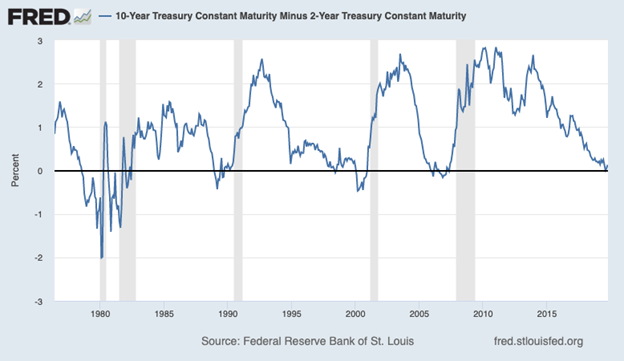 That said, a rapid escalation of the trade war with China and/or the European Union would help any future recession come faster than usual. This is because the higher the tariffs go, the less business activity there is. Also, trade wars hurt business confidence and that would affect the investment cycle negatively.

For the time being, there are positive signs on the China trade negotiations front, although the fact that the 2020 election cycle is drawing near and the U.S. President faces an impeachment inquiry in Congress surely is factoring into the way the Chinese are handling the trade negotiations.

The closer to the election these negotiations drag on, the more pressure Mr. Trump faces to make a deal, as he would like to have a victory to talk about in his election rallies; so the weaker his position is politically, the more confident the Chinese are to get a better deal.

Assuming that there is a trade deal by the end of 2019 (or early 2020), the U.S. economy may continue to expand for some time and make the present yield curve inversion look similar to what happened in the bond market in 1995 or 1998, when we again flirted with an inversion but the U.S. economy kept on expanding. This is because major tax cuts and deregulation initiatives tend to have a “second leg” effect.

It was the 1986 Reagan tax cut that probably helped Vice President George H.W. Bush get elected in 1988, as he caught the economic boom of the second leg effect of the original tax cuts. Then, George W. Bush had another major tax cut in 2003 and there was an economic surge in 2003, a pause in 2004, and a re-acceleration in late 2004, with the boom continuing in 2005. After the Trump tax cut, we saw a rise in economic activity in 2018, a pause in 2019, but we have not seen a second-leg effect of those tax cuts.

If there is a Chinese trade deal, I think it is entirely possible that the U.S. economy re-accelerates in 2020, which not many economic observers are looking for at the moment. If there is a dramatic escalation of the trade war, all bets are off, even though I can’t imagine many rooting for that scenario. Even the Chinese.

In Germany, every single government bond has a negative yield, with the longest maturity being the 30-year bund closing with a yield of -0.07% on Friday – a yield so close to zero that it will flip in and out of negative territory, depending on which day of the week one looks at it. That’s one for the record books. 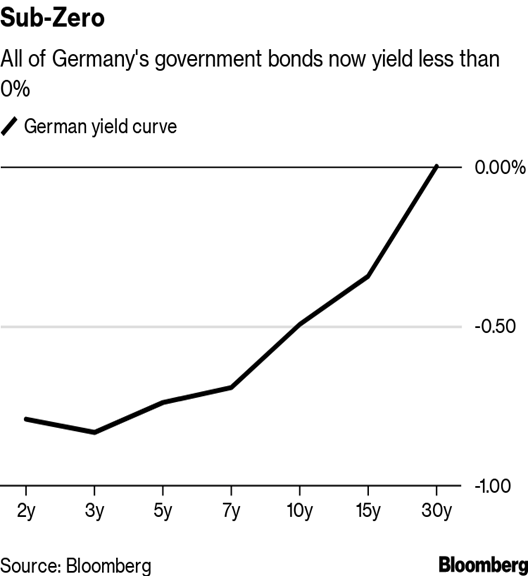 This negative yield curve is happening because of the continued expansion of the ECB balance sheet, which is like printing “electric euros,” but euros available for financial institutions only. Banks take those newly printed electronic euros to buy government bonds, and because of the abundance of electric euros those bonds go into negative territory. That in turn suppresses interest rates on non-government bonds, even though those non-government bonds are still in positive territory.

A lot of observers wonder why such central bank alchemy has not caused hyperinflation. It is because only banks have access to those freshly minted euros, and they are designed to suppress interest rates and stimulate lending and borrowing. The trouble is that the same central banking maneuver did stimulate lending and borrowing in the U.S., but it is not producing the desired effect in Europe or Japan. This is because most Europeans (or Japanese, for that matter) do not necessarily like to borrow as much money as Americans do, no matter how low the interest rate goes.

If the demand for credit is not there, how are low interest rates going to help any recovery?