I think it is important to step back and think about why the Democratic Party’s House leadership would effectively destroy its leading Presidential candidate by proceeding with the formal impeachment inquiry into President Trump that will expose all the questionable business that Hunter Biden got from China and Ukraine. Since President Trump promptly turned over all documents that the House of Representatives wanted to review, there is really nothing there except the previous concerns about corruption in Ukraine.

The stock market initially got hit when the House impeachment inquiry was announced, but the market reversed on Wednesday after the Trump Administration released the requested documents and had a press conference with Ukraine President Zelensky, who also released documents. Furthermore, when Joe Biden was Vice President, son Hunter landed a big $1.5 billion investment that will also likely be investigated.

President Trump said, “The Democrats’ constant personal attacks, vicious lies, and now these baseless impeachment attacks, have never had anything to do with me … Their goal has always been to silence YOU, they want to steal YOUR voice and YOUR vote.” Yikes! I am not predicting President Trump’s re-election yet, but the Democratic Congress’ constant attempt to destroy its opposition – like Supreme Court Justice Kavanaugh and President Trump – is almost certain to backfire with many voters.

Overall, last week was a very sad week for the U.S, due to the House impeachment inquiry. If you like to watch politics, however, the only way I can possibly make you feel better is to say that the political chaos in Britain is even worse, especially after its Supreme Court ruled last week that the decision by Prime Minister Boris Johnson and Queen Elizabeth to suspend Parliament before Brexit was “unlawful.” 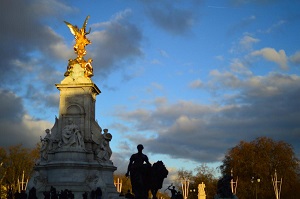 After meeting with President Trump, Boris Johnson hastily returned to Britain and said he “profoundly disagreed” with the Supreme Court ruling but would “respect” it. Johnson talked to Queen Elizabeth and presumably apologized for embarrassing her. Brexit is still on track for October 31st, if Johnson can negotiate an exit agreement with the European Union, so keep your fingers crossed, since Parliament loves to perpetually humiliate and mock Johnson in an obvious attempt to perpetually postpone Brexit.

In the meantime, the rest of Europe appears to be slipping into a recession, because the eurozone purchasing managers index (PMI) slipped to an 83-month low of 45.6 in September, down from 47 in August. This was a big surprise, since economists were expecting to see a 47.3 reading in September.

Even worse, mighty Germany’s manufacturing PMI slipped to 41.4 in September, down from 43.5 in August. Its PMI is now at its lowest level in more than a decade. Since any reading under 50 signals a contraction, there is no doubt that Germany’s GDP – which clearly contracted in the second quarter – is also likely to contract in the third quarter. Since two negative GDP quarters mark the official definition of a recession, Germany could already be in a recession, which could drive euro interest rates even lower.

There was great news on the inflation front last week. On Tuesday, it was announced that, according to the S&P CoreLogic Case Shiller 20 city index, home appreciation slowed dramatically in July to a 2% annual pace, the slowest annual price appreciation pace since 2012. In July, home prices declined slightly in Los Angeles, New York, and Washington D.C. Additionally, in Denver and San Francisco, home prices were unchanged, so only 15 of 20 metro areas surveyed reported home appreciation in July.

However, the Commerce Department announced on Wednesday that new home sales in August soared 7.1% to an annual pace of 713,000. This was a big surprise, since economists were expecting only a 3.5% rise. Also significant was July’s annual sales pace, which was revised up to 666,000 from 635,000 previously reported. New home sales were especially strong in the South and West, which rose 6% and 16.5%, respectively, but new home sales declined in the Midwest and East by 5.9% and 3%, respectively. In August, median home prices rose 2.2% to $328,400 and there is now a 5.5-month supply of new homes for sale. Overall, lower mortgage rates are stimulating home sales, which are up 18% in the past year.

On Friday, the Commerce Department announced that personal expenditures rose 0.1% in August, which was a big deceleration from 0.5% in July and indicative that consumers may be getting cautious since this was the slowest consumer spending since February. Fortunately, personal income continues to grow, but the savings rate rose to 8.1% in August, up from 7.8% in July, showing consumers are delaying spending.

Finally, the Commerce Department announced on Friday that durable goods orders rose 0.2% in August, substantially better than the economists’ consensus expectation of a 0.7% decline. Orders for defense goods soared 15% in August and were largely responsible for the improvement, since excluding defense, durable goods orders declined 0.6%. Business investment declined 0.2% in August for the second straight monthly decline, due likely to the ongoing trade concerns as well as plunging global PMI indices.

Orders for commercial airplanes and parts declined 30.2% in the past 12 months, so it is imperative that Boeing solve its 737 Max problems and resume contributing to U.S. durable goods orders.