This bull market has made millions of Americans richer, if they had just stayed invested in good stocks and not bought into the fear the media threw in their faces every day. The Fed just released its quarterly report on America’s net household wealth. Please note that the word “net” means assets after all debt is subtracted – all credit card debt, mortgage debt, college debt, and bank loans. Net U.S. household wealth rose to a record $113.5 trillion in mid-2019, up 88% from 10-1/4 years earlier, at the start of the bull market in March 2009. Today’s wealth is up 59% from the previous peak before the 2008 crash, in 2007. 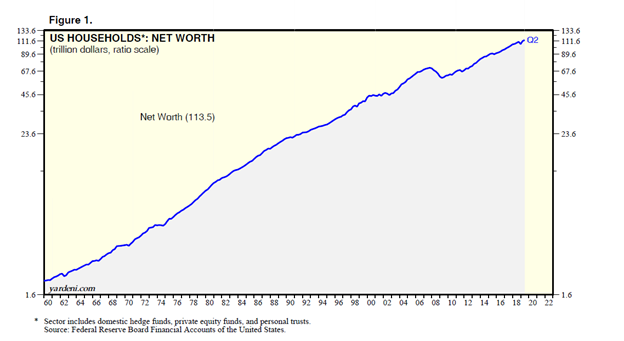 This is a logarithmic chart, so the increase would look far more dramatic if charted arithmetically.

Real estate crashed in 2006 and stocks in 2008. Americans who got back into both assets grew far richer.

Average Americans who owned their own home, invested in 401(k) plans at work, and invested in stocks via mutual funds rode the chart higher. Don’t let the doomsday crowd tell you otherwise. Most Americans own stocks and our own homes, and more of us than ever own (or participate in owning) a small business.

I have been using history to explain why America is the best oasis for your money among all the other “Great Pretenders” on earth – like those who claim to be “Capitalists with Chinese characteristics” in Asia or “Capitalists with Socialist characteristics” in Europe. The high taxation rates and regulation in Europe – or the high level of central control and favoritism of state-run corporations in Asia – are pale imitations of free market capitalism. Manufactured Asian growth rates or the unrealistic utopian cradle-to-grave social promises in Europe cannot be sustained. America, warts and all, is where our money can multiply.

Last week, I hearkened back to historical snapshots in 1919 and 1969, since these century and half-century benchmarks are convenient anniversaries. I could drop the historical baton in almost any year, but let’s move the needle back 150 years ago to 1869. Europe was far richer than America then. Argentina vied with the U.S. as the richest nation (per capita) in the Western hemisphere. What made America the richest nation in the world 50 years later, catapulting above the aristocracies of the world in short order?

On the surface, there were multiple challenges in 1869 – the first year of the scandal-ridden Ulysses Grant administration, starting with the “Gold Pool” in September 1869, in which Grant’s family was mired, but the seeds of future growth lay far beyond a room in New York where traders swapped symbols of wealth.

In May 1869, the U.S. Transcontinental Railroad was completed, with lines from east and west meeting in Utah. Later that year, in November, the Suez Canal was completed in Egypt. Between the two, the world was commercially linked, horizontally. No more dangerous and time-consuming sailing around the Capes under Africa or South America. Railroads linked the mines of the American West to the markets of the American east. This Internet-like web of rails supercharged the commerce between our re-united Union. 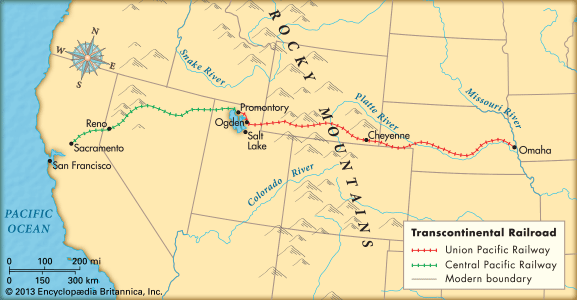 From 1870 to 1900, U.S. iron and steel production multiplied 10-fold, the production of oil grew by more than 20-fold. Cotton and wheat production doubled. The U.S. population also doubled in 30 years, as the whole world seemed to want to come here, with jobs that seemed to be lacking everywhere else on earth.

“The secret of America’s ascent to economic primacy was neither the cleverness of its inventors (England’s were as smart) nor the richness of its resources (Russia’s were richer). Rather, the secret of America’s success was its vast domestic market, the largest single market in the world. The Constitution of 1787, by forbidding interstate tariffs, established the legal framework…

“The results were little short of miraculous. Between 1869 and the end of the nineteenth century, the American economy grew as no economy has ever done before and very few did after. From a laggard in the race to industrialize, trailing Britain, Germany and France, the United States became the leader of the pack with a manufacturing output that by 1900 surpassed the three European powers combined.”