As 2022 kicks off, there is plenty of attention being paid to what can go wrong with the market this year. Be it inflation, Fed tightening, never-ending supply chain disruptions, Chinese aggression towards Taiwan, Russia/Ukraine tensions, labor shortages, a bio-polar Congress that does more to stoke division within the nation than the nation itself, and the divisive mid-term elections – these concerns are underscored by a wave of predictions calling for a market correction on the scale of 10% to 20% by June.

All of these factors could easily play out soon, individually or collectively, so investors are on high alert.

To say that the market faced (and handled) all the bad news thrown at it in 2021 is an understatement.

In the end, the S&P 500 handily outperformed the Nasdaq and Russell 2000, which is an outlier when looking at the 5-year performance data – since Nasdaq usually crushes the other three major averages.

With an already suspicious investment mindset in place as the New Year gets underway, let me take a “glass-half-full” view of the market landscape by reviewing some very promising trends, which raise hopes of what could be a profitable 2022 in the making. Here are five plausible developments to consider.

If South Africa is the template for how the Omicron variant will progress, then this Omicron wave will be unlike all prior waves of COVID. where deaths spiked in tandem with confirmed cases. The death rate relative to the confirmed case rate for Omicron is minimal, as can be seen in the small blip at the far-right portion of the second graph below, as published by the World Health Organization (WHO) last week.

Omicron burned out in 25 days in South Africa. That should be seen as a forward indicator for the U.S. and the rest of the world, which has now experienced record confirmed cases of Omicron. This looks to be the blowoff final phase of the pandemic, as no other major deadly variants have been reported.

This means we’ll soon see EVs for everybody, with prices finally coming down. 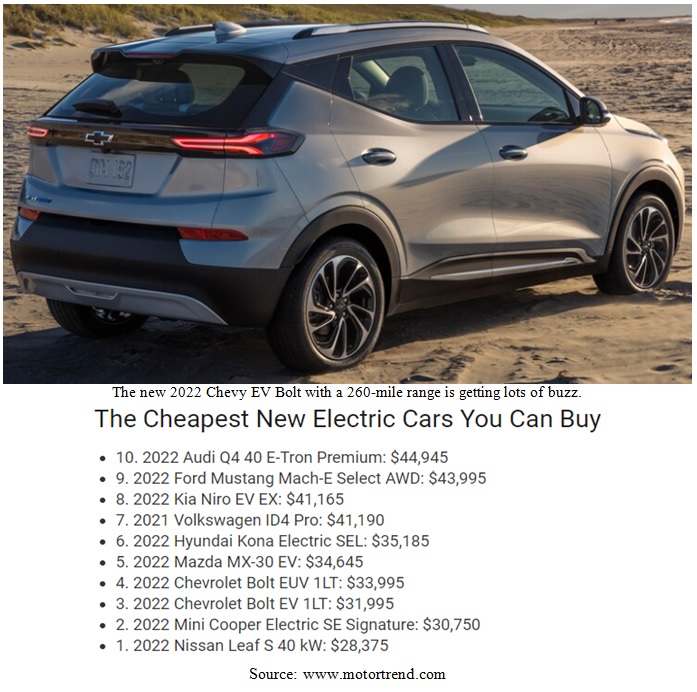 Two of the most elusive cures in medicine are those for Alzheimer’s and Parkinson’s disease, both of which destroy any chance of aging with dignity. While the nearest hope for several late-stage clinical trials in Parkinson’s is 2023, in November 2021, Eli Lilly began TRAILBLAZER-ALZ 4, a Phase 3, open-label, head-to-head comparison of plaque clearance by Lilly’s Donanemab and Biogen’s Aduhelm to treat Alzheimer’s. The primary outcome of the trial is the number of 200 participants who reach complete plaque clearance on each treatment. (See https://www.alzforum.org/therapeutics/donanemab.)

On December 31, Tyler Durden of the Durden Dispatch reported:

“Despite a populist grassroots movement seeking to ban Congress members from trading stocks, one which has attracted bipartisan political support, Democratic House Speaker Nancy Pelosi, arguably one of the most prolific Congressional traders, said two weeks ago that lawmakers should be allowed to make trades while serving.” ‘We’re a free market economy,’ Pelosi told reporters during a news conference. ‘They should be able to participate in that.’

“This line of thinking is completely irresponsible, seeing as how she and her colleagues have access to non-public information and the ability to amass huge profits from that access.”

To alleviate this type of egregious activity, I believe these elected and appointed officials should be limited to investing in index funds until their terms are up. The loss of public trust is at an all-time high, and this set of statutes needs to be changed – starting with a change of heart from House Speaker Nancy Pelosi who reported quite a few trades in December of 2021.

To date, the Fed under Jerome Powell has had the market’s back. Through the end of QE in March 2022, that will still be the case, but market liquidity and inflation will continue well after March since every dollar printed today takes anywhere from three to six months to work its way into and through the system.

There is a long lag effect from when money is printed to when it is used. To this point, there will likely be a sustained and lasting high-level of liquidity to fuel stock market purchases that should soften and/or shorten any market pullback, followed by more record highs for the major averages by year-end 2022.

I’m making no promises – just offering a good dose of “hopium” to help set a bullish tone for 2022.

All content above represents the opinion of Bryan Perry of Navellier & Associates, Inc.

Income Mail by Bryan Perry
My Five “High Hopes” For 2022

Global Mail by Ivan Martchev
Bitcoin is Not Acting Well