Since I wrote last week that bitcoin was acting better than the Ark Innovation Fund, despite their strong correlation, the cryptocurrency decided to prove me wrong and begin consolidating below its 200-day moving average. It has done that before and still managed to come back. The problem is that half the retail investors that hold bitcoin bought it during the past year, and many of those are under water.

We’ll find out shortly if this theory is valid. 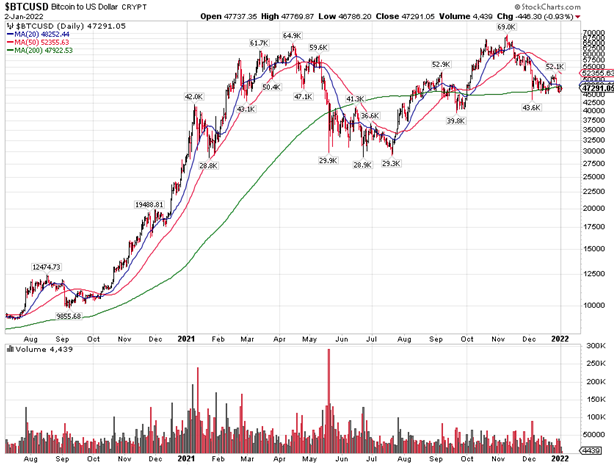 I have heard the stories about how crypto will make the financial system as we know it irrelevant. While no one is disputing the benefits of blockchain technology, no government in their right mind would allow this to happen. That is one reason why China, India, and other countries banned bitcoin and crypto mining.

True, the Chinese are introducing a digital yuan, but this is to maintain and even increase the power of their central government over the financial system. The problem with the digital yuan is that at any given moment the Chinese government knows exactly how much money you have and where it came from, and it will also know where it is going at the precise time you spend it. If there were ever an example of Big Brother, that is it. I am not sure most U.S. citizens would be keen on the Fed doing the same thing.

While there is room to use blockchain technology in order to make the financial system more efficient, the idea that one would bid up a limited number of tokens to the sky – meaning $69,000 or so in the case of bitcoin, thereby minting new millionaires – is absurd. This will likely end badly. The fact that it has not ended yet is an opportunity for those that speculated in bitcoin to get out before it’s too late.

Microstrategy has a Bitcoin Problem

“Bitcoin is a bank in cyberspace, run by incorruptible software, offering a global, affordable, simple and secure savings account to billions of people that don’t have the option or desire to run their own hedge fund.” 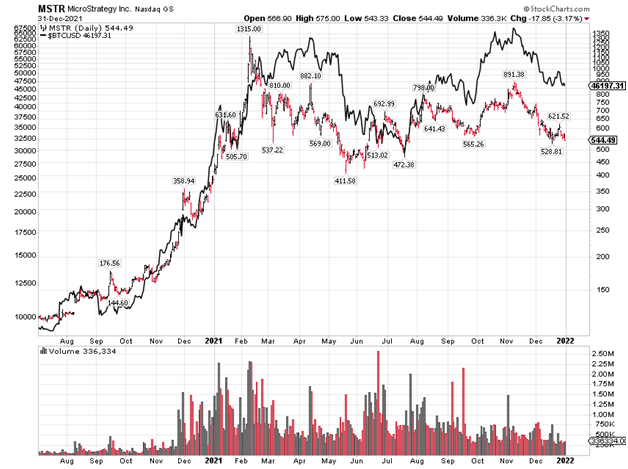 Microstrategy holds bitcoin. Therefore, the stock price of this software company does not reflect the prospects of its software business as much as the prospects of bitcoin. Furthermore, management is issuing debt on more than one occasion to buy more bitcoin (see “MicroStrategy Completes $500 Million Offering of 6.125% Senior Secured Notes Due 2028 with Bitcoin Use of Proceeds” on their Website).

It does not take a financial degree to realize that if the price of your collateral collapses, a company still must service its debts. If bitcoin collapses, Microstrategy could be in for one heckuva cash flow problem. Someone needs to do a debt analysis on MSTR and figure out when those maturities are clustering.

In the meantime, before the real drama starts, there is a negative divergence between MSTR stock and bitcoin. MSTR stopped making new highs as it bought more bitcoin (issuing more debt) and bitcoin made a fresh all-time high right around the introduction of the futures ETF.

I think the stock will continue to act poorly because of the increased leverage on the balance sheet. If bitcoin falls to $28,000, MSTR stock could well trade below $400 (from over $600 a week ago).

The first half of 2022 promises to not be boring for either bitcoin or MSTR stock.

Income Mail by Bryan Perry
My Five “High Hopes” For 2022

Global Mail by Ivan Martchev
Bitcoin is Not Acting Well