At 429 basis points, the spread of the major junk bond index to Treasuries is dangerously close to the “inside 400” level, which is where it spends most of its time in a booming economy. I would not call the U.S. economy “booming,” as there has been a substantial amount of monetary tightening that has not yet sunk into economic statistics, but the economy is not on the brink of a recession yet, either.

I think the Fed should hit the “pause” button, as I expect inflation to decline precipitously due to the zero percent growth in M2 Money (a function of an inverted yield curve). As M2 growth turns negative, which has never happened before as far back as I could find data, inflation should decline notably, possibly towards 2% in late 2023. More Fed monetary tightening risks overkill and will likely produce a recession.

So far, the elusive “soft landing” (avoiding a recession) looks attainable, which I would describe as a best-case scenario given the numerous mistakes the Powell Fed has made. The biggest such mistake was maintaining their pedal-to-the-metal QE policies for too long, until April 13, 2022 (the date of the top in the Fed’s balance sheet, at $8,965,487 million, or just shy of $9 trillion), long after it became clear that inflation was not all that “transitory.” Yes, there is good news on the inflation front given last week’s CPI report, but service sector inflation is not coming down at all, and that may force the Fed to over-tighten.

The 2-year note is the most sensitive to Fed policy and typically leads the Fed. The 2-year Treasury note, at 4.22%, is below the Fed funds rate now, and is down by about 50 bps since November 2022. Basically, the bond market is telling the Fed to stop tightening, but will the Fed listen? We’ll find out soon enough.

Familiar Setup in the S&P 500 Index

Below is the chart I posted in early December (see “We Are Reaching a Possible Inflection Point in Both Bonds and Stocks”). 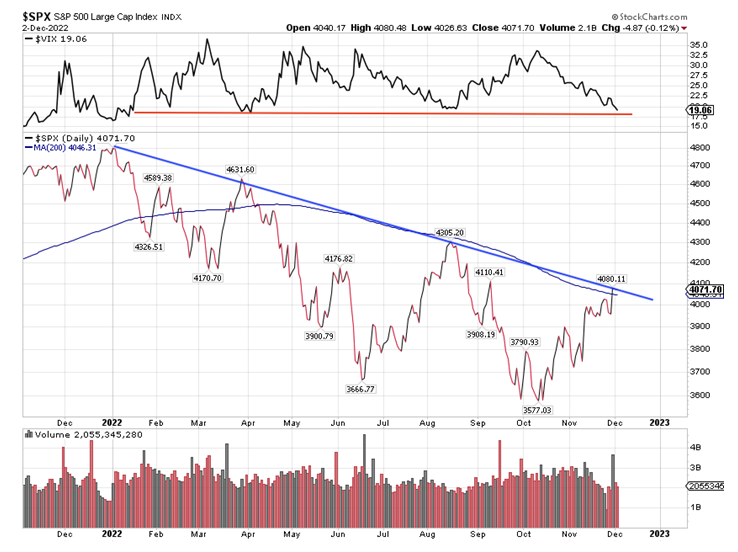 And here is the same chart updated as of Friday. 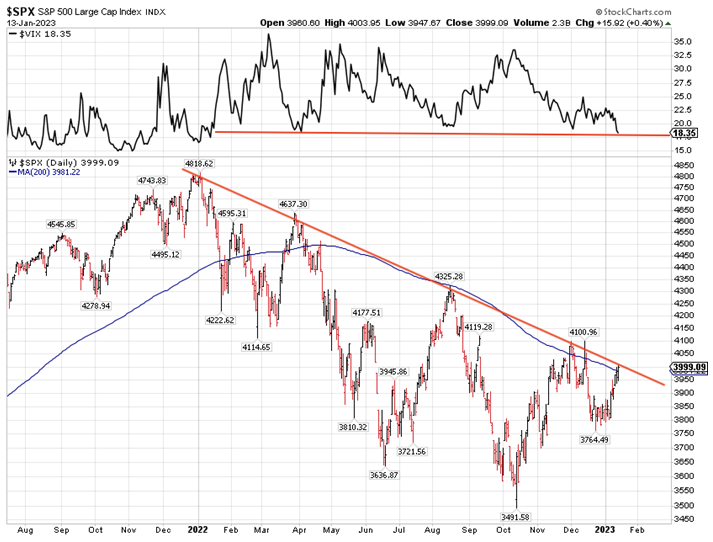 We had a very sharp 8% draw-down in December, which is not typical, as most investors were waiting for Santa to show up. So far, the first two weeks in 2023 have been decidedly positive, and that same downtrend line, when drawn on the Russell 2000 Index has already been broken to the upside. Yes, I think we can rally past that downtrend, but not necessarily right away.

The problem is that on Friday the volatility index went as low as 18.01. Based on trading setups in the past year, that suggests some sort of consolidation in stocks and some backing and filling. The only other time the VIX was lower in 2022 is when we hit the all-time high in the S&P 500 on January 3, 2022.

The S&P 500 index has gotten a little overbought, running into major resistance. Also, the biggest ‘crap’ stocks are rallying – near-bankrupt companies like Bed Bath and Beyond (BBBY). This is somewhat normal and known as the January effect, when December tax loss selling results in a January relief rally.

Keep in mind that overbought breakouts are prone to failure, so some sort of consolidation of the recent gains is likely. As long as the S&P 500 is above 3800, this rally may have further to go, but that would be decided by the fourth-quarter earnings season, which has barely started.

Here are some key points on earnings from the January 13, 2023 “Factset Earnings Insight” commentary: 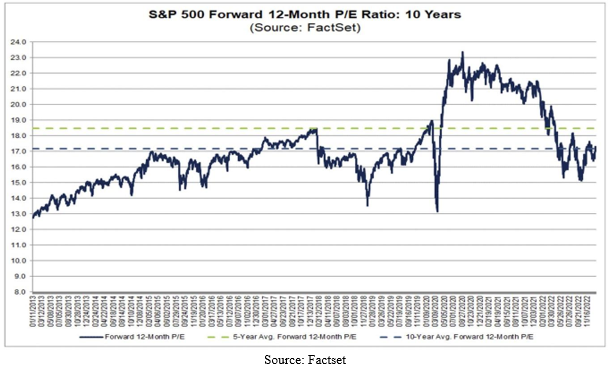 This horrific valuation compression in 2022 is due to rising interest rates, where the forward P/E ratio of the S&P 500, went from way above its long-term averages to below them, while the economy had no recession and earnings rose. What happens next will be decided on how well those earnings hold up.

We will have plenty of information on that front in the next four weeks.