Last Friday, the Dow peaked above 29,000 for a few minutes then scuttled below that level to close at 28,823.77. There’s something about new round numbers that seems daunting to Wall Street traders.

The week of January 10-14, 2000 was a time of market euphoria. We had dodged the Y2K computer bug unscathed. Stocks were melting up. Even though the stodgy Dow was peaking, the S&P 500 kept rising and NASDAQ rose 16% in February alone, peaking at +20% through early March. Talk about a Melt-up!

On Monday, January 10, 2000, America Online agreed to pay $156.14 billion in stock for Time Warner, the biggest merger to date, and one that tied a leading Internet company with an old-line media giant. In a switcheroo of media dress codes, the suit-and-tie AOL CEO Steve Case controlled 55% of the venture, while the denim-clad Time-Warner CEO Gerald Levin controlled a minority 45%. The news sent NASDAQ up its biggest point gain to date, +167 points, while the Dow hit a record high of 11572.20.

This week also marks the 40th anniversary of the golden spike to $850 per ounce, when silver also reached $50, its all-time high in nominal terms. Gold reached its all-time high in real (after-inflation) terms, since $850 in 1980 dollars would be over $2,650 in today’s dollars. Silver was the driver in this case, due in part to inflation fears, but mostly from a cornering of the silver market by the Hunt brothers. It’s important to remember how brief this peak lasted. Gold was only over $800 for two days and it was only above $700 for five days. Silver was over $40 for only seven days. It was a classic spike in the metals. 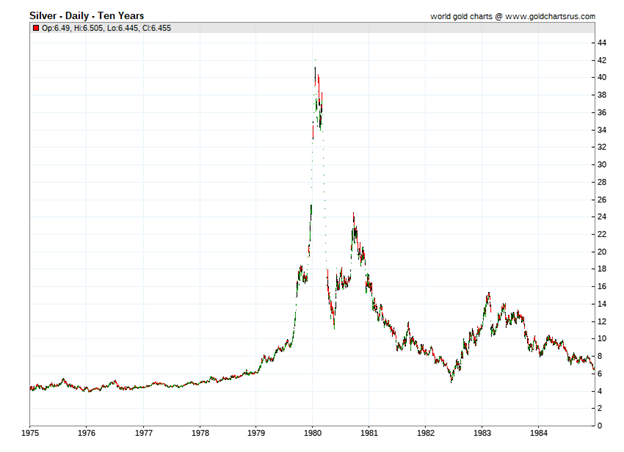 This chart is the very definition of a “spike.”  Here are some of the key numbers in that spiky year:

“Remember those thrilling days of yesterday – a cloud of dust, a thunder of hoofbeats, and a loan arranger saying, ‘I owe silver”? Actually, that was Bunker Hunt testifying on Capitol Hill. He claimed to have lost $750 million (some say $1.5 billion) in silver this year. That many bucks laid end to end would go around the world 7 times or pay for a slow day in the federal government. Bunker Hunt was making like a one-man Chrysler, asking for a billion-dollar loan.” –From “Alexander’s Monthly Economic Newsletter” (AMEN), May 1980

The lesson from this is (1) don’t try to corner commodity markets. A second lesson is (2) you should distrust anyone who tries to tell you that gold is a bad investment by comparing its current price to 1980. A key tenet of “lying with statistics” is a selective choice of starting dates. If you start in the year 2000, for instance, silver and gold have beaten stocks, but both starting points are unfair. Comparing gold to stocks is also unfair to begin with. Gold and silver should be compared to cash, not to stocks. Gold is a valid substitute for cash in a low interest-rate world, and gold has done very well over the last one year, five years, 20 years, 100 years and 5,000 years, so forget about comparisons to some spiky peak in 1980.