Many remember the multiple Presidential tweets in the fourth quarter of 2018 targeting the Fed Chairman. The gist of them was: “It’s not me pressuring the stock market, it’s the Fed.” It turns out Trump was right. The Fed was overtightening, but it has long since stopped doing so and has been accelerating the growth of high-powered money supply for the past seven months while the President is still tweeting at the Fed.

As is often the case with monetary policy moves, the Fed gave the world the raw data in nearly real time, but they neglected to explain what it meant, resulting in the present comical misunderstanding. It’s an established fact from “Money and Banking 101” classes that money supply is controlled by the Federal Reserve. The Federal Reserve can increase the money supply with open market operations and decrease it at will. It’s like infusing electronic cash into the system, but it’s cash for financial institutions only.

There are three forms of money supply, ranging from narrow definitions to broad, namely M1, M2, and M3, which is no longer reported but possible to reconstitute as the individual components are still being reported. It turns out that there is a fourth category that combines all forms of money, most of which is in electronic format – like checking accounts and money market funds, that can be redeemed at par without delay. That category is called Money Zero Maturity, or MZM.

In the chart above, the red line is the growth in year-over-year MZM money supply. The blue line is the Dow Jones Industrial Average. Notice the correlation? A downshift in money supply growth tends to rub off negatively in the stock market and vice versa. It’s not perfect, nothing in life is, but the sharp deceleration in MZM growth in 2018 did see rising volatility in the stock market. In the span of a little over two years, the annual growth rate of MZM went from 7.08% from June 13, 2016 all the way down to 2.35% on December 10, 2018. That’s how rapidly the Fed was slowing the growth of the MZM money supply, and in that regard the flow of credit in the U.S. economy. When people say that “money makes the world go around,” in the 21st century that’s electronic money and the flow of credit, not gold coins.

What is particularly interesting is that the Fed can raise the fed fund’s rate, as it did on December 19, 2018, and still accelerate the rate of growth of MZM, in effect infusing electronic cash into the system.

I think the Fed made a dovish turn on December 10 – the lowest point in the MZM growth rate – without telling anyone, as they realized they were overtightening, but they hiked (as expected) the fed funds rate on December 19 as they did not want to be perceived to be bowing to pressure from the White House.

Money Supply is Not the Sole Driver of Stock Prices

Zero Maturity Money is not the only determinant of the direction of the stock market, but it does affect it. In 2008, after Lehman failed, MZM growth was running at much higher rates, as per the direction of the Federal Reserve, but because banks had stopped dealing between themselves and many funding markets were frozen, MZM took much longer to affect the stock and corporate debt markets. Monetary policy works with a lag, but the lag times can vary dramatically depending on economic and market conditions.

Furthermore, we have had an epic clash of fiscal and monetary policies since Trump took office. The only other such clash, albeit somewhat more civilized, was between Ronald Reagan’s supply side economics and Paul Volker’s hawkish Fed. Before the fiscal stimulus, which is what the Trump tax cut is, we had a lot of deregulation, since Trump won the election that was turbocharging business activity and lifting the stock market. Also, we have had record levels of stock buy-backs, which shrink the amount of available stock for sale as well as raising earnings per share, a clear-cut form of turbocharged financial engineering.

As they view their job as counter-cyclical, the Federal Reserve did lean against activities turbocharging the economy and the stock market. That much is evident by the accelerating run-off rate of the Fed balance sheet as well as the decline in MZM growth – until December 10, 2018. 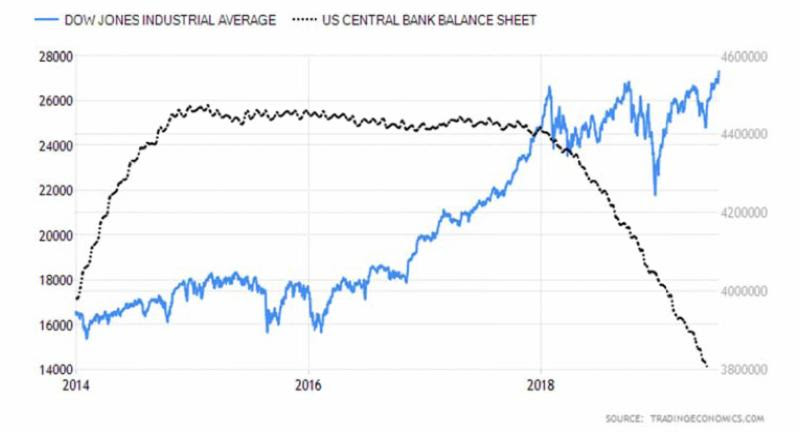 Shrinking excess reserves, which the runoff rate of the Fed balance sheet results in, are part of MZM. Still, it has to be stressed that as excess reserves are shrinking, MZM is expanding because there are other types of open-market operations that affect MZM growth that are ongoing at present – in Donald Trump’s favor – but he just hasn’t been made aware of them, as is evident from his recent tweets.

A word of advice for the U.S. President: Fed Chairman Powell has been in your camp since December 10, 2018, so please leave him alone. Get the Chinese trade deal done and denuclearize North Korea and I think you may very well win the Nobel Peace Prize – and the next presidential election.