“The whole aim of practical politics is to keep the populace alarmed (and hence clamorous to be led to safety) by menacing it with an endless series of hobgoblins, all of them imaginary.” – H.L. Mencken

Tomorrow night marks the first of what will soon seem like an endless series of debates by at least 20 Democratic hopefuls running for President in 2020, culminating in their National Convention July 13-16, 2020 in Milwaukee. Their purpose, as with most proceeding candidates, will be to exaggerate current problems beyond all rational bounds and then claim the sole proprietorship on their eventual solution.

The incumbent’s job, by contrast, is to show how wonderful and problem-free our nation has become under his leadership and how everything will collapse if he is not re-elected. In launching his re-election campaign on June 15, President Trump followed that playbook well, tweeting “The Trump Economy is setting records, and has a long way up to go…However, if anyone but me takes over in 2020 (I know the competition very well), there will be a Market Crash the likes of which has not been seen before!”

By contrast, Trump’s Inaugural address on January 20, 2017, portrayed dark visions of a nation in crisis, including rising crime (which had been falling), saying “This American carnage stops here and now.” Like many past Republicans, he focused on “depletion of the military,” which remained larger than the next nine nations combined, and repeated the myth of Democratic candidates, that the middle class was dying.

In “The Myth of America’s Decline: Politics, Economics and a Half Century of False Prophecies” (2013), German author Josef Joffe (Die Zeit editor) recited a litany of election year false warnings since JFK’s 1960 Missile Gap warnings, which I covered here three weeks ago. Ronald Reagan used the same strategy in 1980, citing a “Window of Vulnerability,” including the USSR’s ‘heavier and more accurate’ missiles.

In his Detroit nomination acceptance speech of July 17, 1980, Reagan said, “America’s defense strength is at its lowest ebb in a generation, while the Soviet Union is vastly outspending us in both strategic and conventional arms.” Neither of those latter claims were true, but they were credible since Brezhnev was capturing several nations around the globe under Carter’s watch, so Reagan won in a landslide in 1980.

“The sky is falling” has always been a lucrative pitch, Joffe wrote. “The strategy is to paint the nation in hellish colors and then offer oneself as a guide to heaven. The country is on the skids, but tomorrow it will rise again – if only you, the people, will anoint me as your leader.” Watch the debates tomorrow and (just for laughs) jot down all the times you hear miraculous promises (as Ed Yardeni imagined) to give Americans “free universal health care, free pre-kindergarten, free college education and full-time jobs … to forgive student loans and to provide a Universal Basic Income to anyone who gets out of bed (or not).”

The Vast Difference Between Wars and “Rumors of War”

“And ye shall hear of wars and rumors of wars: See that you be not troubled, for all these things must come to pass, but the end is not yet.” – Matthew 24:6

When domestic problems or scandals arise, Shakespeare wrote the original script for manipulating public opinion – in Henry IV’s advice to his son and successor: “Busy giddy minds with foreign quarrels.”

Now that the Mueller report isn’t the daily fodder of the scandal-hungry press, all of a sudden news from Iran, China, Venezuela, Europe, and elsewhere is suddenly more relevant. Those trouble spots have been there all along, but spurious rumors of 2016 collaboration with Russia have wasted two years of mental room and board with hundreds of Beltway scribes, to the utter boredom of 328 million other Americans. 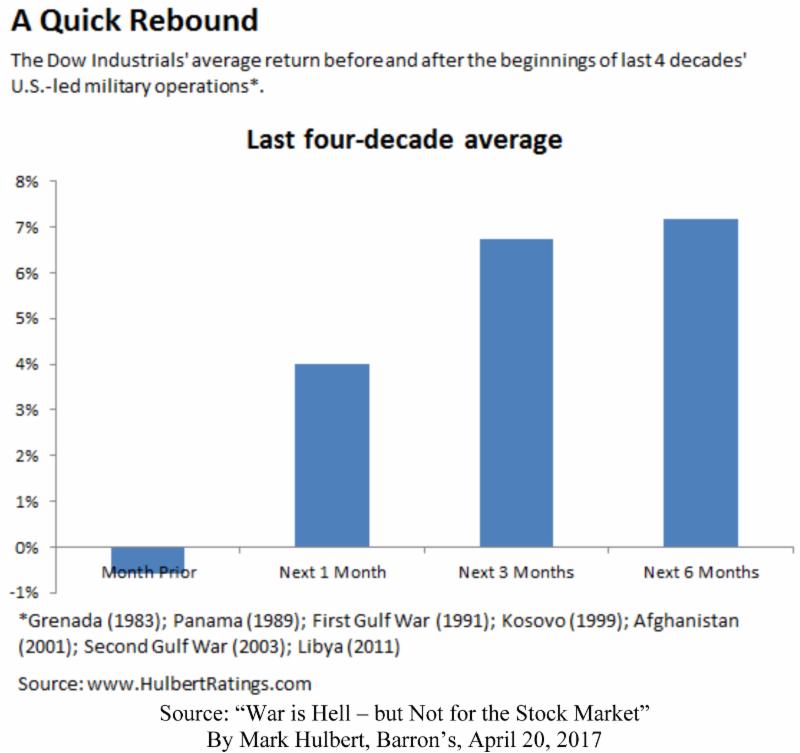 Last Thursday, the Dow and S&P 500 reached all-time highs on the rumors of a U.S. military strike in Iran, but the market corrected on Friday after President Trump pulled back from those planned attacks.

Some things never change. Nearly 200 years ago, on June 1, 1822, the 79-year-old retired 3rd President, Thomas Jefferson of Virginia, wrote the 2nd President, John Adams, 86, of Massachusetts, “To turn to the news of the day, it seems the cannibals of Europe are going at one another again.” TJ spoke of a “war between Russia and Turkey” and then proclaimed that “whichever destroys the other leaves a destroyer the less for the world.” Jefferson later mused that “the life of the feeder is better than that of the fighter.”

The lesson from those old sages: With the U.S. energy-independent now, perhaps we can leave defending the Straits of Hormuz to someone else. Maybe it’s time for energy-dependent Europe and Asia to act.