06.04.19: The Bears Endlessly Tout the Enduring Myth of America’s Decline

“We choose to go to the Moon, in this decade, and do the other things, not because they are easy, but because they are hard, because that goal will serve to organize and measure the best of our energies…”
– President John F. Kennedy, Rice University, Houston, September 12, 1962

America has been in decline my whole life. In 7th grade science class in October 1957, Russia’s Sputnik showed how Russia’s science was better than ours. TIME made Nikita Khrushchev its 1957 Man of the Year and LIFE magazine (March 24, 1958, cost: 25-cents) had a 9-page spread on a “crisis in education,” about how Russian kids were learning science and we weren’t. It was time to step up … or surrender. 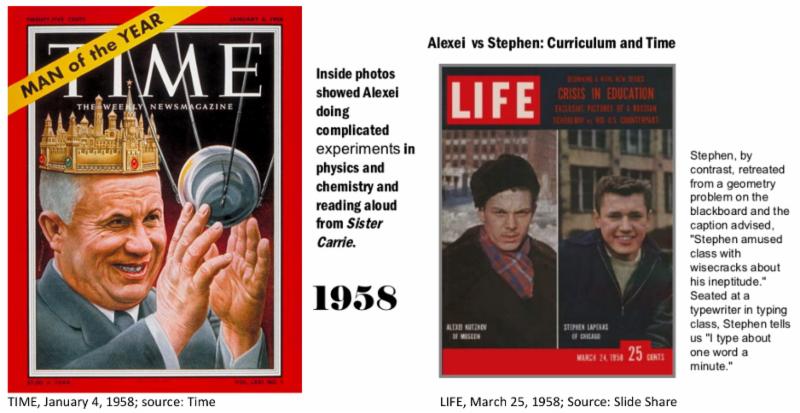 The economy was also in the tank then. Shortly after Sputnik was launched, the Dow bottomed out at 419.79 on October 22, 1957. In the fourth quarter of 1957, U.S. GDP contracted by 4%, and in the first quarter of 1958, GDP fell at an appalling 10% annual rate. In 1958, a top-secret government report, “Deterrence and Survival in the Nuclear Age” (commonly known as the Gaither Report) said that the Soviets had “probably” (meaning they didn’t really know!) “surpassed us in ICBM development.”

John F. Kennedy, a young Freshman Senator from Massachusetts, turned that secret Gaither Report into a winning 1958 Senatorial campaign, and then a winning 1960 Presidential campaign by promising to close the “Missile Gap,” a gap which never existed. By 1960, the U.S. had 3,000 strategic warheads and 2,000 launchers as well as the world’s first missile submarine, with 16 nuclear-tipped Polaris missiles, immune to a Soviet first strike. Any missile gap was in our favor, but Senator Kennedy warned (in Canton, Ohio, September 27, 1960) that “the United States has reached maturity…our High Noon has passed…our brightest days were earlier, and now we are going into the long slow afternoon.” Harvard professor Henry Kissinger agreed, writing: “Only self-delusion can keep us from admitting our decline to ourselves.”

At the time, the U.S. was in another steep recession with a 5% annualized GDP decline in the fall of 1960. That marked two deep recessions in a three-year period, similar to the double dip recessions of 1979-82.

America’s space program was an obvious failure. The first Atlas rocket launched with a Mercury capsule exploded. The first Mercury-Redstone launch only went about four inches off the ground. But the young new President was undeterred. Just four months into office, JFK said, on May 25, 1961 – a month after a disastrous Bay of Pigs fiasco and 10 days before his embarrassing Vienna summit – that we would put a man on the moon and bring him back safely before the end of the decade. What? Is that man crazy? We had no idea about how to build a spaceship, no portable computers, no rockets capable of entering space.

This is when my family got drafted. Dad was already a rocket scientist working on the classified Bomarc missile program for Boeing in Seattle. He was sent to Huntsville, Alabama in June 1963 to work at the Marshall Space Flight Center and then to the NASA Michoud Assembly facility in New Orleans. (In the process, thousands of mostly white, liberal families entered a racial cauldron, but that is another story.)

Boeing was given overall authority for the creation of Saturn V, the largest and most powerful rocket ever launched. Dad worked with a team of brilliant engineers to build the first stage of Saturn V, the integrator for the entire Saturn rocket stack. There was a cluster of five engines in each of the first two stages of that three-stage rocket. Taller than a 36-story building, it had a total of three million parts, and each had to function reliably and in coordination with the other components. In all, 15 Saturn V rockets were built, and none failed. 50 years ago, the Saturn V delivered the Apollo 11 astronauts to a manned moon landing. 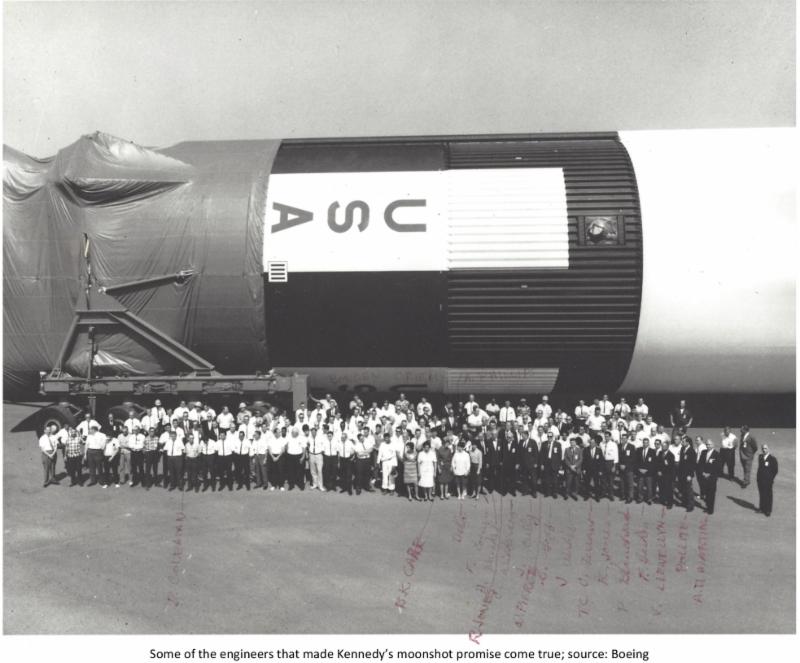 Navellier & Associates owns Boeing in managed accounts and our sub-advised mutual fund. Gary Alexander does not own Boeing in personal accounts.

Despite Our Growth, Success, and Power, Pessimism Still Rules

Going to the moon was never popular. In 1964, only 26% of Americans thought we should try to “beat the Russians in a manned flight to the moon.” Even after a few successful moon landings, the most common complaint was, “We can put a man on the moon, but we can’t….” (you complete the sentence).

There was no widespread joy in America over Neil Armstrong’s “giant leap for mankind,” which historian Arthur Schlesinger, Jr. called the most important event of the 20th Century. On the same weekend of the moon landing, the press was more consumed with Ted Kennedy’s car careening off a small bridge in Chappaquiddick. The next month, headlines focused more on the Manson murders and Woodstock, along with atrocities in the seemingly endless Vietnam War, and rising protests against it.

Long-term pessimism was still in vogue in 1969. Paul Samuelson, who wrote the dominant economics textbook of the day, and who won the Nobel Prize in Economics in 1970, wrote in the 1967 edition of his textbook that the Soviet system was growing faster than the U.S. and the two systems would reach parity sometime between 1977 and 1995. In 1970, National Security Advisor Henry Kissinger told retired navy chief Elmo Zumwalt that the U.S. had “passed its historical high point like so many earlier civilizations.”

In the 1980s, pundits said Japan would pass us by 2000. By 1991, the Soviet Union was dead, and Japan’s economy was careening downward. Now they’re saying that China will surpass us by 2030. Same song, third verse, probably with the same outcome. China is overspending on a centrally planned global outreach and domestic controlled economy and may come to the same screeching halt as the Soviets did.

Betting against America doesn’t pay. One of the world’s richest men tells the America-in-decline crowd:

“For 240 years it’s been a terrible mistake to bet against America, and now is no time to start. America’s golden goose of commerce and innovation will continue to lay more and larger eggs.” – Warren Buffett.